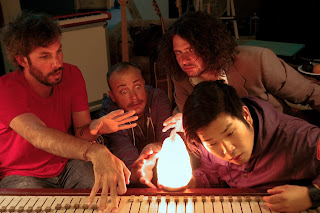 For a band that’s always been looking ahead, 2013 marks a rare time when RX Bandits is looking back. The prog-punk icons have re-emerged and are embarking on a 20-date tour to celebrate the 10th anniversary of their career landmark album The Resignation. These shows will feature the band performing the album in its entirety, in addition to playing fan favorites from the rest of its catalog. The tour comes to The Crofoot Ballroom in Pontiac, MI on July 23rd.

And if ending their hiatus wasn’t cause enough for celebration, RX Bandits are releasing a five-song EP of covers – their first recorded material in four years – as a gift to fans who have supported them over their 15+ year history. Four of the songs are being released for FREE – one per week beginning June 3rd leading up to the tour commencement – with the fifth being exclusive to a limited edition CD version that will be available for purchase at the shows.