NEXT SAT: The FINAL Shadow Art Fair in Ypsi 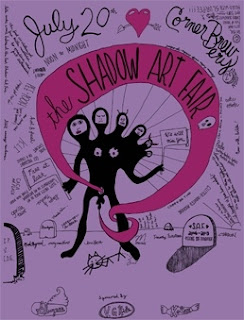 Shadow Art Fair is an all-day juried art exhibit that features Ypsilanti’s local artistic talent. An avenue for the eccentricities of Ypsi, Shadow has been a staple in the art community since its inception in 2006.

During the course of the 12-hour-long show, more than 40 artists pack into Corner Brewery, filling the space to the brim with local talent, interactive art projects and live music.

The 2013 Shadow will be the final hurrah for the showcase, and one for the record books. To commemorate, Corner’s brewstaff have created a special beer: The Cherry Queen, a sour
mash wheat wine fermented on fresh Michigan tart cherries.

“Yes, after discussing this eventuality for the past several years, my fellow organizers and I have finally come to a consensus and decided to invoke the nuclear option,” he wrote. “It’s been a hell of a run, but, like old Ben Kenobi, we’ve decided that the time is right for us to step aside so that others might flourish in our absence, experiencing the full intensity of the force, which has motivated us these past several years, for themselves.”