Lenka Brings Happiness and Shadows to Pike Room this Thursday 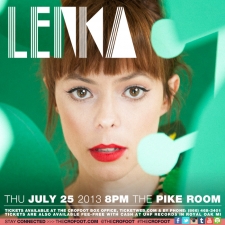 I hear tickets are going fast for Lenka’s show this Thursday at the Pike Room. It’s for a good reason too, because if you are looking for a little summertime happiness rolled together with good music you need to look no further than Lenka. Lenka is on the eastern leg of her North American tour and I spoke to her in Boston from her hotel room before getting ready to play there.  “The shows have been going great and we are all having a good time.”
Lenka explains to me that with her new album “Shadows” some hard decisions had to be made for her set list. “Some songs from the first and second albums have never been played live because I know which ones work well live. This time around I’ve added a few new ones. In fact, I leave the encore songs up to my audience to make sure I play what they want to hear.”
On the subject of her album “Shadows” I noticed it has a bit of a delicate and soft feeling to it, to which Lenka agreed with me “I wanted to make kind of a dreamy, lullaby album. I wanted it to sound different from my older work but I still wanted to retain whatever that “Lenka” thing is that I bring to my music while making it more uplifting and soothing.”
I told her I found the title “Shadows” could be perceived as dark and foreboding but she sees it differently, “I’ve always been fascinated by shadows as a metaphor. The idea is that they are a remnant of you and my songs are kind of the same thing. Even though it’s not a dark album, I think it is a night time record.”

One of the special things with past Lenka shows is her use of horns in her music giving it an authentic and organic ambience. “Horns are special to me because my Dad is a horn player and I learned how to play the horn at an early age so it’s something I wanted to keep with me. I use them in a different way, I go for a Burt Bacharach 60’s type of sound. However, this tour I wanted to do something different so I’ve brought a violin and cello along.”
Lenka is married and now with a son comes across as a very happy person so I wondered what could upset her. She replies, “I don’t like reading about hate and cruelty. A lot of my songs are ways of making me feel better about the world. I strive for happiness but every time I read the paper I get very angry and sad.”

Lenka’s latest video “Nothing Here But Love” from “Shadows” finds her body adorned with the pieces of a small, luscious town which is examined throughout the video. “We spent a couple weeks planning it out with a prosthetic person measuring up my body. On the day of the video shoot I was lying in position for 5 hours as pieces of the village were glued and airbrushed to my body. It was fun. It was worth it.”
She continues telling me how she enjoys artistically expressing her femininity, “I think the visual identity of a pop singer is very important, maybe nearly as important as the music. So I do put a fair amount of thought into creating that world. But when it comes to me wearing a pretty dress, I guess that’s just me being a girl wanting to wear a pretty dress.”

Lenka plays the Pike Room on Thursday, opening the show is Satellite an alternative rock quartet from Nashville, their sound  has been described as “Snow Patrol meets Kings of Leon.”