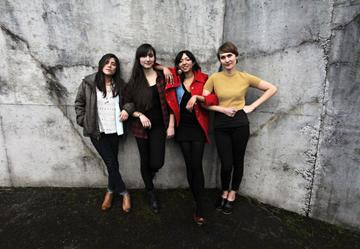 Seattle quartet La Luz immediately brings to mind the girl groups of the ‘50s and ‘60s. The immaculate four-part harmonies, the luscious layers of reverb, the occasional choreographed dance move, even the band’s penchant for oldies-style artwork—it all conjures images of beehived ladies singing sweetly on grainy black-and-white television

But give the new “Brainwash b/w T.V. Dream” single a spin and try to pin down a specific reference point from the past. You can’t. The dexterous but economic keyboard lines of Alice Sandahl and the stripped-down groove laid down by the rhythm section of Abbey Blackwell and Marian Li Pino don’t fit in with wall-of-sound icons like The Crystals or The Ronettes. The nimble surf rock twang of guitarist Shana Cleveland is at odds with classic Motown groups like The Marvelettes or The Supremes. Yes, the doo-wop nostalgia is certainly there, but the manufactured glamour and studio sheen is absent.

The ladies of La Luz are true Pacific Northwesterners--swathed in warm wool sweaters, laying into their instruments as their hair messily spills over their faces, making records in trailer parks on the outskirts of the city, and battling the gloomy weather by channeling the summer on the two golden nuggets of their latest EP. The first pressing of this 7” is limited to 500 copies on translucent yellow/gold vinyl as well as being available digitally worldwide.