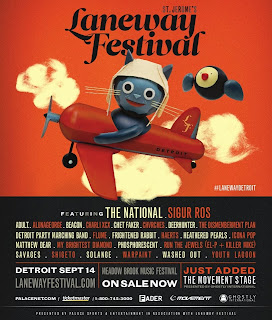 Laneway Festival, the indie festival of the year is coming our way in just six days to Meadow Brook Music Festival. This is Laneway's first year to the Detroit area but the festival has been around since the mid-2000's where it originated in Melbourne, Australia. Each year the folks behind Laneway pour their creative minds and souls into the festival to make it something more than just a bunch of bands playing on a few stages. The bands are carefully chosen, with this year's headliners being The National and Sugar Ros, both established bands known for their staggering live performances. In total over 2 dozen bands will be playing across 5 stages, including one stage devoted to our own local Movement/Ghostly artists. Each day this week until the monolithic event takes place I'll be presenting band profiles and information on the festival. If you are going to Laneway or want a sneak peek into the bands and set times you can download it here.

One of the bands playing Laneway is the sublime dreampop band Washed Out.If you're not familiar with them you've probably heard them by way of Portlandia's opening credit song. They are aptly described of their facebook page as "bedroom synthpop that sounds blurred and woozily evocative, like someone smeared Vaseline all over an early OMD demo tape." The creation of Ernest Greene from Georgia has just released the first Washed Out full length "Parocosm" on Sub Pop. If the soundscapes of Washed Out sound impossibly big for one person to create, take into consideration over 50 instruments are poured into Parocosm. On tour Greene's got a backing band creating more of  a chill-party vibe for his densely layered, languid tracks.