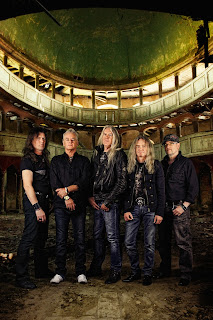 British metal legends SAXON announce a North American tour which will run September 12th- October 10th. The tour is a rare treat for SAXON fans as it hits many markets that the band has not visited in some time. The group are touring in support of their critically acclaimed new album Sacrifice but promise to play all of the fan favourites from their 30+ year catalogue, including tracks like “Denim & Leather”, “Wheels Of Steel”, “Ride Like The Wind”, “Motorcycle Man” and “Heavy Metal Thunder” all of which have cemented the band’s legendary status. All vids have over 8 million collective clicks on youtube and the band has sold over 12 million albums. Joining the trek will be FOZZY. Following the band’s highly successful appearance in last year’s UPROAR tour, FOZZY are touring on their most successful album yet, SIN AND BONES, which debuted at #1 on the Billboard Heatseekers chart upon release. The album contains the track “Sandpaper”, whose video has already surpassed an amazing 500,000 views.

SAXON’s Biff Byford comments, “We’re really glad to anounce a new tour of North America and Canada with the Sacrifice world tour! The album has done fantastic around the world! We can’t wait hit your shores with the Saxon invasion with very special guest Fozzy. It should be a fantastic tour for all metal heads.

We have been friends with Chris Jericho for years so there has never been a better time to hook up with FOZZY for a tour that will take us from the east coast to the west coast and finally winding up in the Great White North”. FOZZY’s Chris Jericho adds, “After our highly successful US tour last summer on UPROAR, we’ve been chomping at the bit for the right opportunity to return to North America …and now it has arrived! To tour with the legendary SAXON is a metal dream come true and the perfect way to satisfy all of our AMAZING fans in the US and Canada and to make tons of new ones in the process. Get ready for Sacrifice and Sin…we’re gonna tear your heads off and leave u screaming FOZZY, FOZZY, FOZZY!!”

North American Saxon fans will also have the option for a rare opportunity to meet and greet with the band, a limited number of VIP packages are available at www.Saxon747.com

Opening support on the tour will be Halcyon Way.