THIS SAT: The Dirtiest Most Bizarre ART SHOW That is NOT In The Alley EVER! 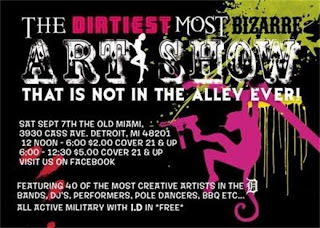 Since its eviction from the hallowed grounds of Theatre Bizarre by the powers that be, the art show formerly known as Bizarre Bazaar has wandered the wastelands of Detroit in search of a new host. Well, they found one.

Featuring over 40 artists such as Chris Turner, Jeremy Harvey, and Emi Slade to name a few; bands such as Devil Elvis, Half Life, The Raw Dealers, FuckKnot, and the Mike Hard show; DJs such as DJ Skeez, The Adventures of Skettle Dee & Skettle Dum (InterCom & Charles English) and more. Featuring exhibits by Theatre Bizarre, Defend Detroit, and more, as well as mouthwatering BBQ by Killer Grillz. Your MC for the night is Detroit’s own rock star extraordinaire and movie icon, the one and only Jimmy Doom.
Posted up by DC in Detroit on 5.9.13