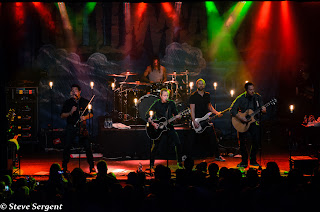 Yellowcard brought their Ocean Avenue Acoustic Tour to St. Andrew's Hall in Detroit on Sunday night. This tour is following the release of the "Ocean Avenue Acoustic" album which was released earlier this summer celebrating the 10 year anniversary of the break-out album "Ocean Avenue". The album was recently certified platinum (over one million sold).

The Detroit show included "Ocean Avenue" being played front to back in acoustic fashion, which is what the band is doing for most stops on the tour.  Acoustic? Don't yawn just yet, after a short break they plug-in and rock your face off with a second set, electric! 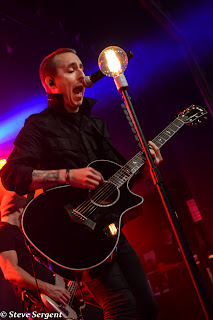 The stage setup included some nice mood lighting and some acoustic guitars. Hold on though, this was not about to be your coffee shop acoustic show.   The show began with the opening song off "Ocean Avenue", "Way Away". This was about as high energy of an acoustic song as you will hear live and it would set the bar for an amazing almost two hour set.  "Way Away", "Breathing", and "Ocean Avenue" while being played acoustic still rocked the crowd before they slowed it down a bit.  The acoustic title better fits a song like "Empty Apartment" and a few others which have been re-recorded and changed slightly for the tour and new album.  After a mix of high energy and softer acoustic versions of every song on the album it was time for a short break. 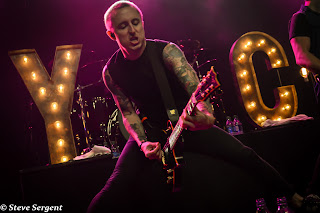 After everyone re-energized and plugged in electric it was time to rock.  Both the crowd and band did.  With a quickly formed mosh pit, crowd surfing, and violin player Sean Mackin's patented backflip off the drum stage, the show did not not disappoint.  With about 8 songs off of their other group of albums the band pleased just about every person in attendance.

To see all my photos from the show CLICK HERE

For everything Yellowcard visit http://yellowcardrock.com/
And visit them on facebook at https://www.facebook.com/yellowcard