Editor note: Starfucker was coming to town and we needed someone to cover the show so we did what we have always have done when we are short handed...we strong armed one of our readers into becoming a contributor (75% of our contributors started out as MCB ticket winners)

This past Sunday, STARFUCKER.
Or STRFKR.
Or Starfucker.
Whichever you prefer - they themselves use them interchangeably, as I will.
I hadn’t been to The Crofoot since March - when I surprised my girlfriend with a Lindsey Stirling concert - and Pontiac, being the squalid town that it is, had no significant appeal to me until this past weekend.
I had been planning to see Starfucker for the past two months, but thanks to my flakey ass friends, I’ve been left with nothing but a history of ambiguous text messages with little certainty of having a partner in crime:
“Oh yeah sure. I luv STarfker!! lol”
“Do you want to go then?”
“haha sure. buy the tickets!!”
“Are you sure you’ll go?”
“yeah sure!!”
“...”
“what?”
I heard that MOTORCITYBLOG was looking for someone to cover the show. I figured that I’d give myself a respectable reason for going to the show alone so I contacted the editors. I got the confirmation and was given a set of instructions. When one of my fickle friends found out that I had received a press pass with a +1, he quickly expressed genuine interest in attending; big surprise.
Fast forwarding to the 15th, it was time to drive out to Pontiac. While in the car my friend asked me, “How are you going to do it?” I responded, “What do you mean?”
“I mean how are you going to say that you have a press pass?
We’ve never done this before.”
We practiced what we were going to say on the second half of our 40 minute drive. I think we were starting to nail it, I was still nervous though. What if I’m not on the list and everyone at The Crofoot laughs at me while I tilt my head down in shame?
We found free parking next to a big structure filled with hobos; you can hear them roaring in the night. As we were walking up Saginaw St. we were still doubting the existence of our press passes. We were cracking jokes about how we would probably end up buying tickets from a laughing ticket vendor:
“Press pass!!??? HAHAHAHA. Yeah sure! That’ll cost you 15 bucks plus the convenience fee!!”
The silent street further affirmed our doubts. Usually there would be a large crowd of smokers in front of an active music venue, but this corner seemed too deserted to belong to a bar hosting a show. There were three big guys with huge beards standing in front of what I thought was the front door, but they directed us around the corner to the real entrance when we tried to go in: 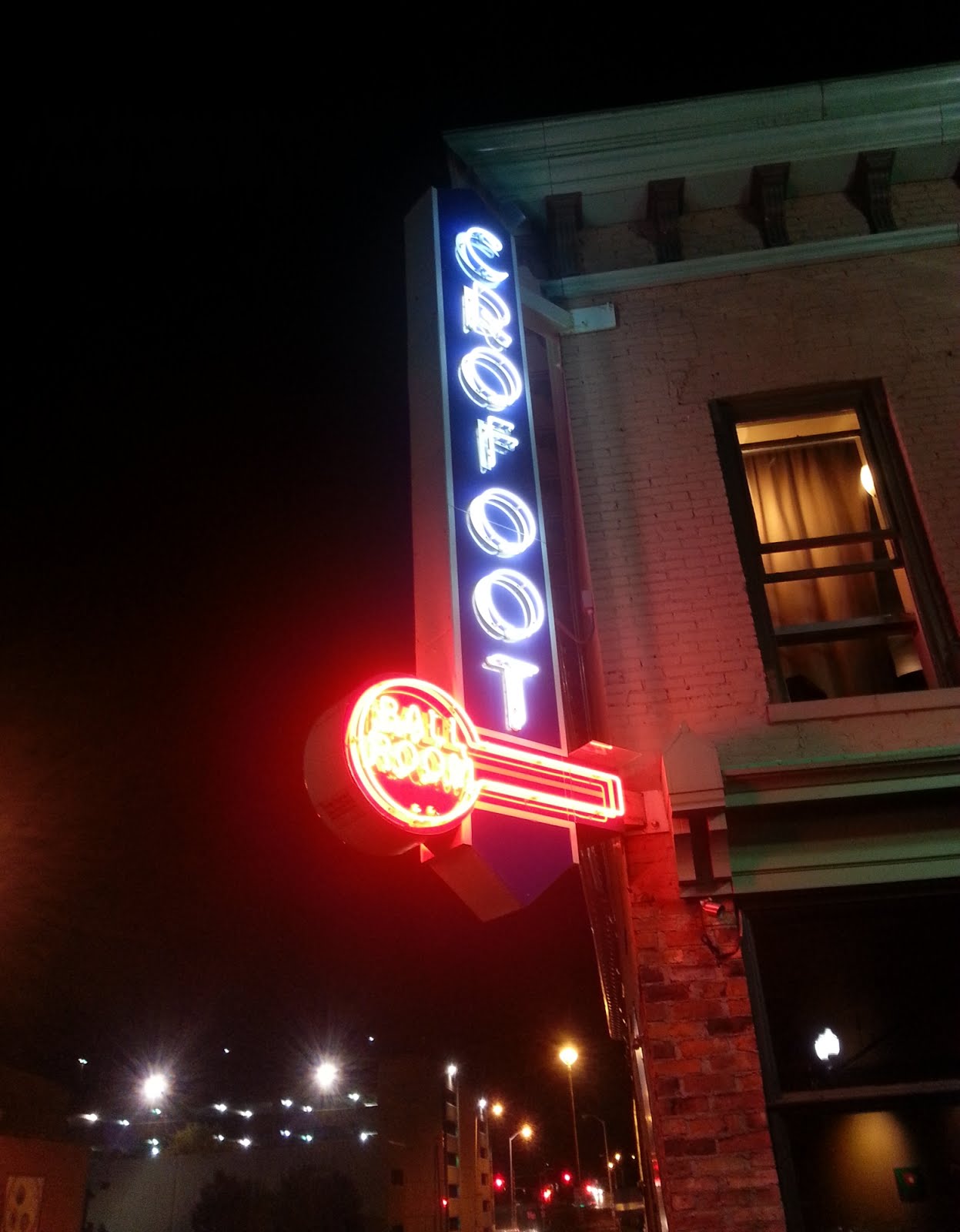 We finally were inside of The Crofoot. It was go time. I told the lady that I should be on the press pass list. She told me to wait while she checked her list. This took about a minute; I was beginning to think that we didn’t exist on this list. She then said that she had to check another list - okay so we are still good… haven’t struck out just yet.
One of the three large bearded men outside were back in the building now and the lady
went and asked him something. After talking for a bit, they separated and the bearded guy walked out of our view and the lady came back to us. She told us to wait, they had to check the other list.
It was probably another four minutes until the bearded guy came in and told the lady something. Immediately after, the lady ripped off two tickets and told us to enjoy the show. I was tempted to ask if we had really been on the list, or if they were just letting us in because they felt bad for us. I pussied out though.
We went in while the opener Small Black was playing. The crowd was small - the second story balcony was empty- but it was more into the music than any Crofoot Crowd I had ever seen.
The distribution of age was much more normal than usual… i.e: there was a good balance of older and younger people rather than the usual teenage crowd. If you are into stats I can sum it up pretty easy for you:
Normal Crowd Age: (Mean: 16.5, SD: 0.8)
This Crowd Age: (Mean: 24, SD: 3.5)
You want confidence intervals? Fuck you, my perceptions are infallible.
Right off the bat, STRFKR opened up strong with the electrifying Rawnald Gregory Erickson the Second, that immediately capitulated the crowd into an aura of music. It was quickly followed by a myriad of their other best songs, including Sazed, German Love, and Leave it All Behind. In between songs, I had a short debate with my +1 over the merits of not immediately following Hard Smart Beta with Pop Song, but pretty soon I found myself too washed away in the visuals to care.
Oh yeah, the visuals. 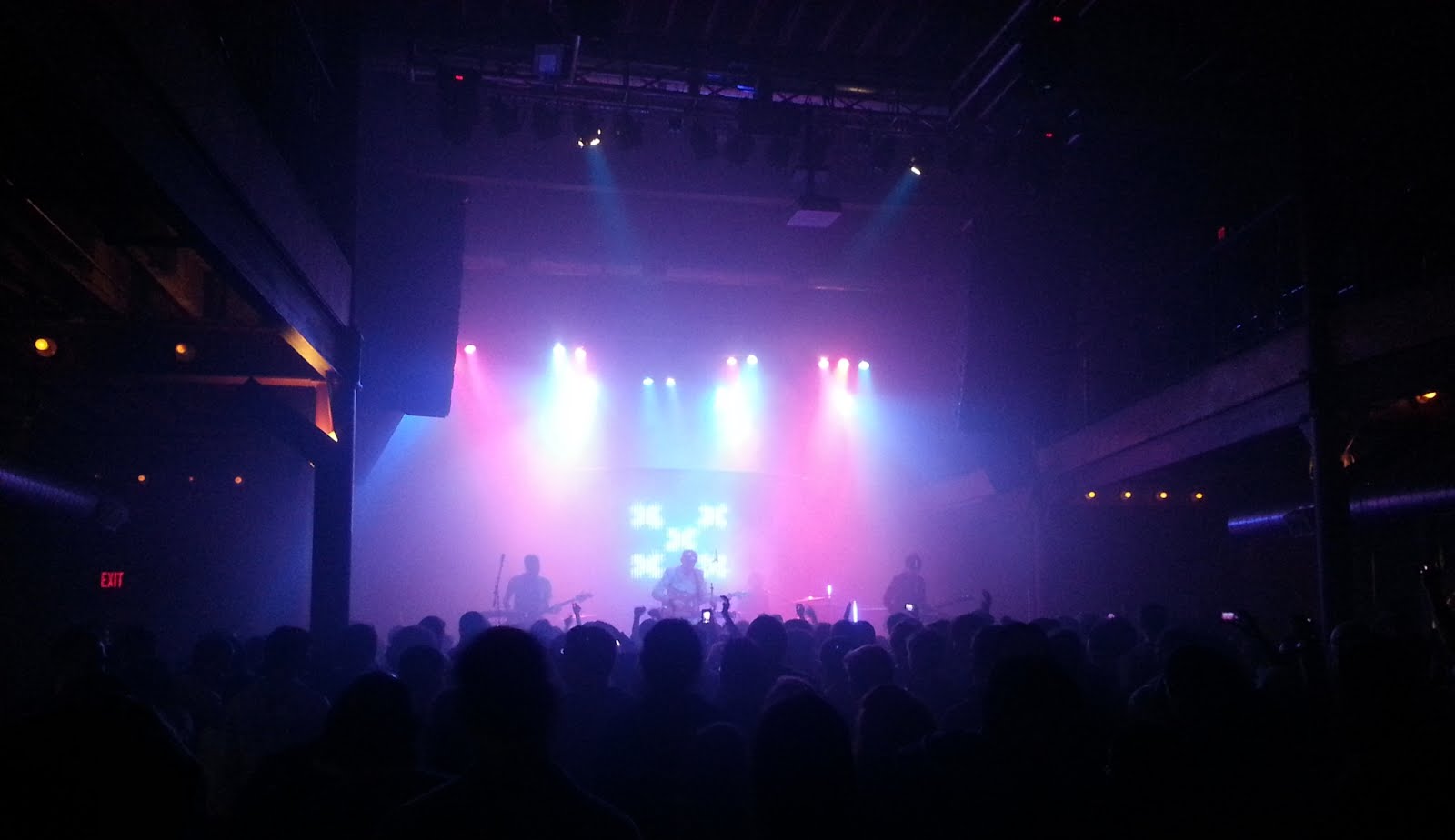 It’s hard to tell from my lousy camera phone (two years of scratches unprotected by a case have taken its toll) but the electronic display playing behind the band was the centerpiece of the whole set. In the forefront of the bright screen, the details of the band members were reduced to mere silhouettes making them look like one of those old Apple ads. The low-fi  display, reminiscent of 8-bit gaming, complemented the synthpop style of STRFKR perfectly. 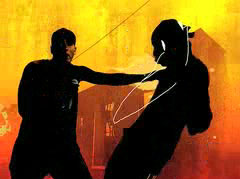 What STRFKR looked like, minus the kung fu.
Source: http://gattacainc.typepad.com/photos/uncategorized/ipod.jpg
The visuals for each song started off with their own simple theme, such as a pulsating hand, and as it progressed, variations and contortions were thrown in leaving you wondering what it would do next. Ultimately, this captivating display was the centerpiece for the show that drew your eyes while STRFKR melded into your ears. Overall, it was a pretty good show.
While not the best attended, the hardcore Sunday-night STRFKR fanbase was out in full swing; making up for the small crowd. I didn’t get to see the encore, however. In a respite between songs I realized my +1 was looking rather fazed out - and not because of the music. He’d just driven back from camping in Ohio and a weekend of sleeping on the ground had taken its toll. Since he was DD-ing, I knew it was time to leave before my night ended up with coffee being shoveled down our collective throats in hopes of having one of us alert enough to drive. Despite not seeing the entire show, the parts I saw more than made up for it. With the 3/4ths of the concert that I saw consisting of every great STRFKR song I can think of, its hard to imagine having missed that much, yet I know they must have saved something exceptional for the finale.
My good friend ended up driving us home safely…. home as in Travis Coffee for a half dozen drunk cheeseburgers with onions, before making it back actually home. 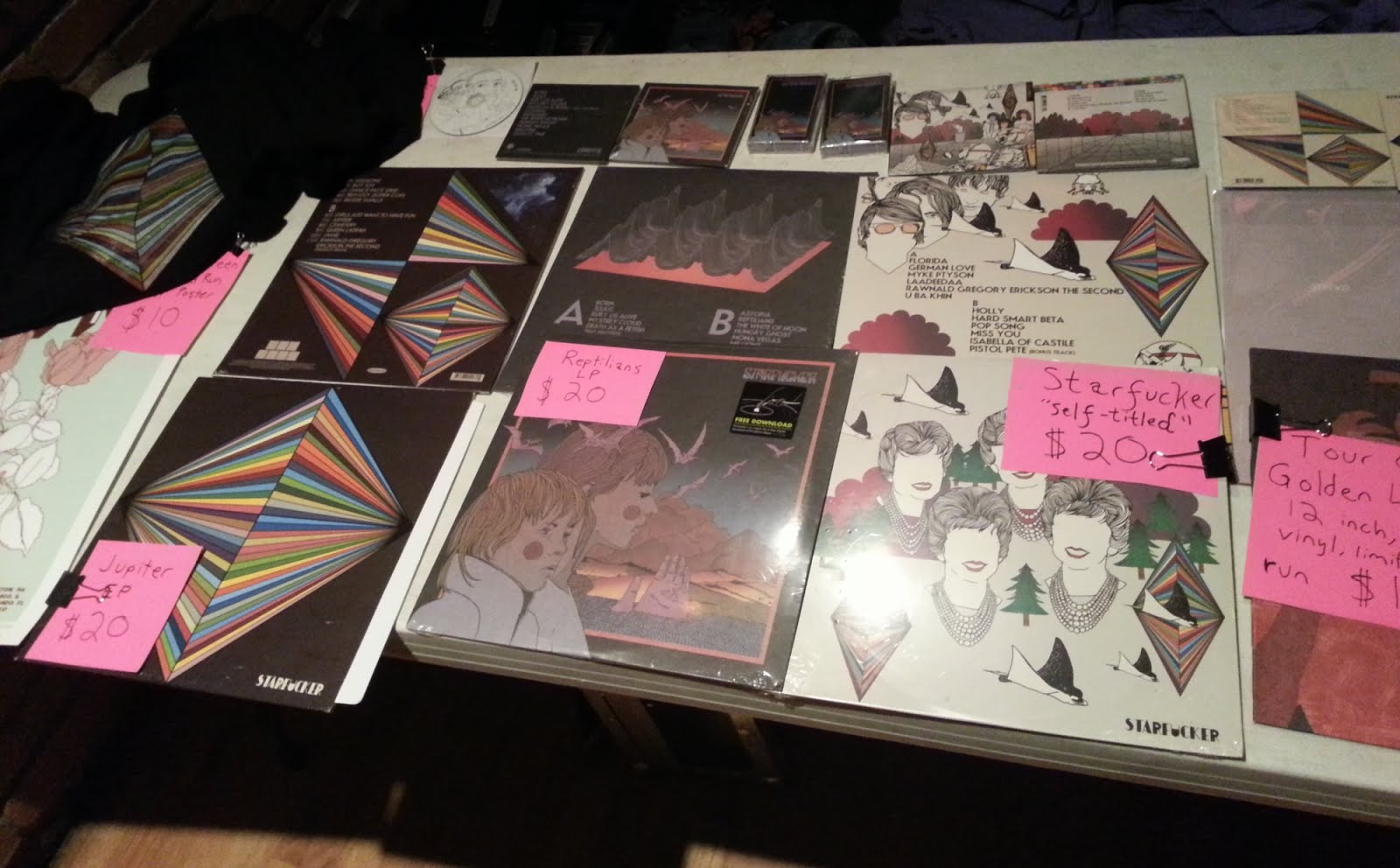