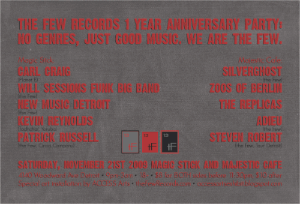 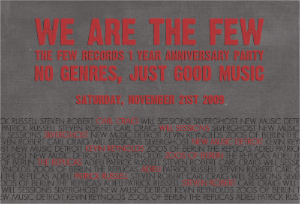 As part of the website launch, they are offering 3 FREE downloads
from Will Sessions, Silverghost and New Music Detroit.

the Few Records 1 Year Anniversary:
No Genres, Just Good Music.
We Are the Few.
Promotional Support by Greening of Detroit.

Majestic Cafe Side: Silverghost (the Few), Zoos of Berlin, the Replicas, Adieu (the Few) and DJ Steven Robert (the Few, Tour Detroit).

the Few Records will be celebrating their 1 Year Anniversary and throwing a party to reflect their newly diverse and talented artist roster.

With the recent signing of Silverghost, New Music Detroit, Steven Robert and Patrick Russell, combined with the Few's artists Will Sessions and Adieu, there is no better time to get down with the Few Records. Grammy nominated and Movement's 2010 Creative Director Carl Craig headlines the mini-music festival. ACCESS Arts will be creating multiple art installations as well. Both rooms are musically curated by the