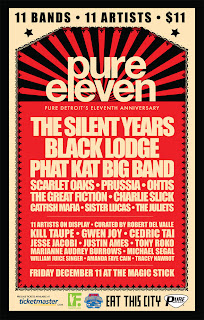 December 11 At The Magic Stick

As the heart of rhythmically raps in urban intervals, Pure Detroit methodically measures each beat by keeping two fingers on the city's concrete pulse. The duo behind Pure Detroit, Borsay and Shawn Santo, are not only legal business partners who share a duo of urban planning and design degrees, but are also legal lovers — a marriage brought to life the summer before Pure Detroit's first store opened in 1998.

Eleven years later, Pure Detroit has continued to grow. The Whitney location has since closed, but Borsay and Santo now see over a Vera Jane outlet, three Pure Detroit stores (located in the Renaissance, Fisher and Guardian buildings) and three coffee shops and eateries — Rowland Café and Stella International Café (carry-out and catering), both located in the Guardian building, while another Stella International (full espresso bar) rests in the Fisher. "As we grew, we wanted to reinvest in the city," explains Borsay. "We want the city to grow and blossom, to be more vital and bustling." The Pure Detroit stores offer a wide selection of accessories, from purses made entirely of seatbelts to the highly successful "Detroit Funk" and "Detroit Soul" t-shirt lines. On Friday, December 11, that same retail force that brought you "Detroit Funk" will be celebrating 11 years of success with the sort of anniversary bash most businesses dream of. PURE 11 — 11 bands on two stages along with 11 artists on display for $11.

PURE 11 will bring together everything Pure Detroit has stood for over the past decade plus — diversity in sound, culture and the arts in a city that is boiling over with vibrant talent. By following this philosophy, PURE 11 will bridge the gap between punk, folk, alternative indie, rock 'n' roll and hip-hop by hosting headliners The Silent Years, Phat Kat Big Band and Black Lodge along with supporting acts , Charlie Slick, Sisters Lucas, Ohtis, the Great Fiction, Catfish Mafia, The Juliets and Scarlet Oaks. Visually, PURE 11 will bring together the youngest and most promising artistic talent in the form of Gwen Joy, Tony Roko, Tracey Nawrot, William Juice Singer, Michael Segal, Cedric Tai, Justin Ames, Jesse Jacobi, Kill Taupe and Marianne Audrey Burrows for one exciting evening of sound and culture curated by local art critic Robert del Valle.

Pre-sale tickets are available through www.Ticketmaster.com, and at the door.