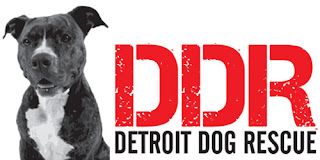 Detroit Dog Rescue
We want to raise $1,000,000 to open Detroit's First NO-KILL Animal Shelter
MISSION STATEMENT
There are 50,000 - 100,000 stray dogs running loose in the streets of Detroit, and only 23 animal care workers to rescue them.  Over 90% of dogs picked up in Detroit are euthanized. There are simply not enough resources, funding, rescue workers, or people who are willing to adopt.

Detroit Dog Rescue was born in February 2011 after the City of Detroit refused to allow access to a network television series that would have documented the stray dog situation. There is a stray dog epidemic in the city, just as there is in many cities across the United States that have had to deal with economic decline, dwindling populations and abandoned buildings. If other animal lovers around the world could see what we see on the streets of Detroit every day, we know that they would help us make a difference in this city, one dog at a time.

Detroit Dog Rescue is focused on raising awareness for the plight of these forgotten animals. We use our voices to tell their story.