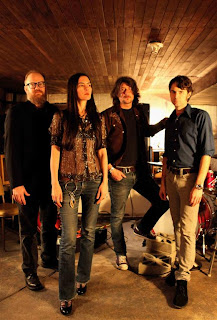 Jesse Sykes & The Sweet Hereafter will be playing at the Magic Stick on Wed 11/9
The band released their album Marble Son on August 2nd to rave reviewsThough oft saddled with the "alt-country" tag, of late, Sykes and Co. have moved into slightly heavier and darker territories.

Marble Son exemplifies a band at their creative pinnacle—heavier and more complex than previous records; the music resonates among the parallel worlds of the avant-garde and the timeless. Sykes’ trademark thematic darkness and acclaimed songwriting have never been more present; yet Marble Son speaks of evolution, which Sykes describes as, “a sonic mirror of the most chaotic, turbulent times of our lives, where beauty triumphed, and the tears that spilled became this record"