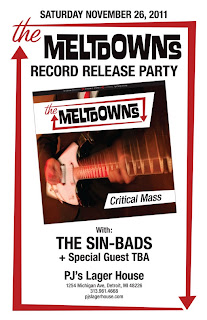 The Meldowns will celebrate the release of their first full-length album, Critical Mass, with a record release party at PJ's Lager House on November 26.

The first pressing of Critical Mass is an LP/CD set with a 12-song LP and 16-song CD.

The Meltdowns formed in late 2005 as a new project from the Neurotic Bop team, the guys responsible for the 3-D Invisibles, The Volcanos, The Hellbenders, The KAOS Killers, and more. The Meltdowns started by playing covers of obscure mid-60s British Beat records. Other influences — 60s garage, psyh, punk — crept in as the band began writing original material. Chris Flanagan, Bill Bowen and Rick Mills each contributed songs and took the lead vocals, making for a diverse and dynamic set. Covers were abandoned as new original material took over. Critical Mass collects the best of these.

Also appearing at the show will be the Sin-Bads, whose members include scene veterens Freddy Fortune (Fortune & Maltese, Freddy & the Four Gone Conclusions) and John Szymanski (The Hentchmen). A third to-be-determined band will kick the evening off.