STIRLING’S ROCK N' ROLL BIRTHDAY PARTY!
Some of Detroit's finest rockers are getting together to celebrate local music/club promoter/rock aficionado Stirlings’ birthday. Stirling has been the driving force behind many area nightclubs throughout the years. He first started hosting modern dance parties in the '80s at the legendary dance clubs Todd's, The Leidernacht (now the City Club), The Majestic Theatre and The Warehouse. He later moved on to promote live music at The Sardine Bar, 313.jac/Jacoby's, and the park stage at Cityfest. He continues to be a strong advocate of Detroit talent by introducing new up and coming artists to local audiences. The annual party is one event that will showcase some stellar Detroit performers.
This promises to be a great night of local music. Performing will be some of Stirling's favorites. Local rockers Rocket 455 will headline the night, songstress Audra Kubat, a solo performance by Eddie Baranek of The Sights, and sets by Kenny Tudrick, newcomer Ian Link and a special appearance by songwriter Doop Duprie of Doop & The Inside Outlaws will be featured.
The rock n' roll party is on Friday, Dec. 9, doors at 8 and showtime is at 9pm at EL CLUB located at 4114 West Vernor Highway in southwest Detroit. 313-841-0400. $7 cover charge and 21 and over are welcome. 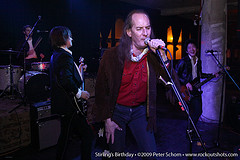