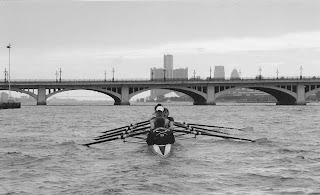 DETROIT – Rescheduled from Spring of 2014 due to weather, the Detroit River will be the site of the sixth annual Dossin Regatta, presented by the Detroit Historical Society's Dossin Maritime Group.

Crews from the Detroit Boat Club, St. John's Jesuit Academy (Toledo), St. Ursula Academy (Toledo), Grosse Ile and Saline will kick off the races at 9 a.m., starting near the U.S. Coast Guard Belle Isle Station and ending in front of the Detroit Boat Club on Belle Isle.  Following the races, you are invited to head to the Dossin Museum around 11 a.m. to celebrate with a special award ceremony.

Admission to the museum is free, although donations are accepted. Guests may also watch the rowing events from the banks of the river near the Dossin and the Detroit Boat Club.

The Dossin Great Lakes Museum, located at 100 Strand Drive on Belle Isle, is open Saturdays and Sundays from 11 a.m. to 4 p.m. Admission is free for all, all the time. Permanent exhibits include Built by the River in the John A. and Marlene L. Boll Foundation Gallery, the Miss Pepsi vintage 1950s championship hydroplane, the Gothic Room from the City of Detroit III, a bow anchor from the S.S. Edmund Fitzgerald, the pilothouse from the Great Lakes freighter S.S. William Clay Ford, and one of the largest known collections of scale model ships in the world.