DC is a longtime contributor to the MCB.
She can be reached at DC.in.Detroit [at] gmail.com 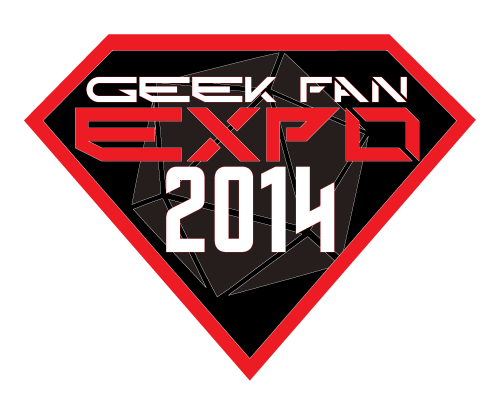 This weekend, I had the pleasure of attending the inaugural Geek Fan Expo, thrown at the Doubletree on the Dearborn/Detroit border—a cozy space in an easy-access suburb (with plenty of free parking).

The con's aim seemed to primarily be to bring a manageably-sized get-together to the local fandom. Of the vendors and attendees I spoke to, most were from around Michigan and Ohio. This is a definite advantage for folks who don't want the hassle and crush of some of the giant local cons (Youmacon), while still being able to meet new people, play games in bigger groups, and see some top-notch talent. 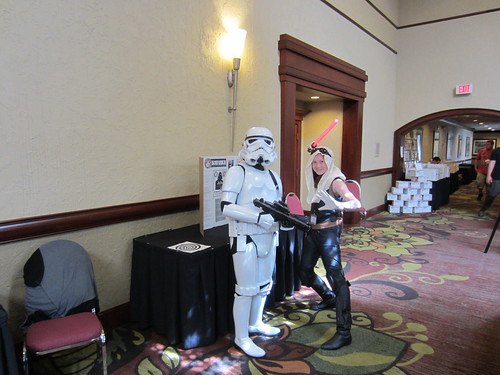 I'm a panel-goer when I attend these things, so my projected schedule was very busy for all three days, spread out across all the topics. On Friday afternoon, I started with the "Mind Control in the Media" talk at 5pm with Michael Marcus. Since there were only about 4 people in the room, I wasn't sure how much hope to hold. But! everyone kept saying, it's Friday! And it's early!

Later in the day when I attended a talk from Rob Paulsen and Aaron G in a room of about 15 people, I realized what was going on: People were there… they were just in the gaming rooms. A stroll past the two-dozen video gaming stations set up along a back wall confirmed this, as well as when I popped my head into any of the 2 or 3 different active tabletop and card gaming areas. I won't even pretend to know what any of the games are, I'll just say that those areas had a lot of asses in seats.

The three highlights of Friday night came in quick succession. During a viewing of locally-produced—and charmingly funny—puppet video show, "String Theory," the hotel power went out. I initially thought they were just shutting off the lights for us to watch the video, but then I realized there was NO light…and heard the tell-tale "whooooooop!"s of a large group of people thrust into unexpected darkness. Power was quickly regained, and immediately followed by an ominous PA voice asking us all to please find our way to the main ballroom for the next half hour.


I've lived in the midwest long enough to know there was going to be trouble when Friday's expected high was 95F and Saturday's was 72F. And we got it: driving rain with the threats of worse. The cheerful con-goers obediently shuttled into the main room where Ford Theater Reunion were setting up for that night's performance. While I was doing a rough headcount to estimate how many people total were in attendance (about 100), the soundcheck quickly morphed into crowd control/entertainment with a jazzy performance of "Careless Whisper," featuring accordion. That was something we have all known has needed to happen for a long time.

Once we were cut loose, I returned to "String Theory" and the story of the competing rogue scientists, unknowingly operating on opposite sides of the same island. From there, I had intended to go straight into the Leatherworking with Crimson Chain talk, but the Nerd Life Productions guys kept catching my eye with their Nerdy Flirting Speed Dating sign-up, so at the last minute, I threw my name in. Well, not my name: one of the features of speed dating is that all of the participants are anonymized. So for the purposes of that hour, I was STORM. Also for that hour, I was one of only 3 women participating (one of whom didn't seem to be single). Since there were only 4 men participating, it seemed like I at least had the odds on my side.

Believe it or not, this was my very first experience of any kind with speed dating. The Nerd Life guys made it fun, and also made it clear that their events weren't about finding The One; more about making friends. In that kind of environment, that wasn't difficult to do. They gave us 5 minutes with each participant, and I could easily have talked to any one of the four for much longer—in fact, throughout the weekend, I did speak to each of them at some length. Were there any matches? A super heroine doesn't speed date and tell. Their usual Nerdy Flirty Speed Dating events take place in a comic store in Ann Arbor and usually draw about 40 participants; you can check out their site for more on that if your nerd-senses are tingling.

One of the last events of the evening was a panel talk featuring voice artists Rob Paulsen and Aaron G, which gave us a moment that should really simply be heard, rather than read:

On Saturday, I was joined by a friend with better nerd-cred than mine (a published tabletop game creator, beat that), whose last con was the gigantic GenCon in Indy. When we browsed the small but quality vendor room, I could see the "aww, isn't this cute?" look on his face. There could definitely have been more vendors, and I suspect at future Geek Fan Expos, there will be. But for now, participation seemed to be the name of the game. 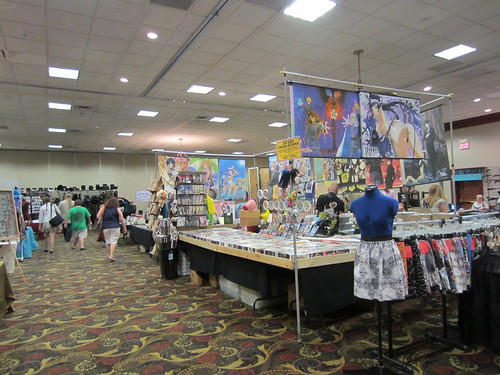 Saturday was to be the big programming day for me, starting with something called "Eek! There's a ghost in my house!" How am I going to resist that? That turned out to be a couple of people telling anecdotes of weird (but ultimately very explainable) things from their homes and those of friends. Not much there there, except that I learned that ghosts "don't have vocal cords," however they can move furniture. We moved on to the Super Geek Quiz Off, emceed by the folks at The Rack Show podcast and when we crashed and burned in the very first round, we hopped over to the "Furries!" panel.

As much as furries are a favorite punchline of nerddom, it's something I find genuinely interesting. Because there were only 4 people in the room for that one, I took the opportunity to ask our panelist some legit questions. Turns out, only about 20% of people in furry fandom costume. A lot of the fandom is simply enjoying cartoons, movies, and other art that feature anthropomorphic animal characters. And while some of the furries DO feel that their "fursona" is an integral part of their inner beings, many of them simply enjoy creating characters sometimes to role play, sometimes simply to draw or sew. (If I sound overly interested in this topic, it's because I am. I do believe there's a furry con in my future—perhaps this March for Motor City Furry Con.) 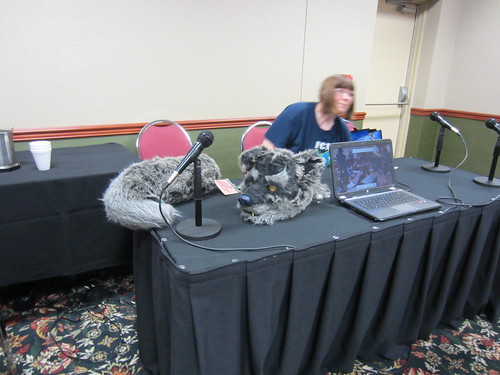 After escaping into west Dearborn proper for a nice dinner at Frida on Michigan Ave., my friend and I made it back for the Cosplay Hypnosis show. My skepticism is well-known, and I have a lot of thoughts about hypnotism. At the same time, hypnotism and stage hypnotism can rightfully be addressed as two different topics. Our hypnotist, Michael Marcus, made it clear that his version of trance, even when done on stage for entertainment purposes, would not—and could not—include any activities the entranced would be unwilling to do. Because this was a Cosplay Hypnosis show, his 6 volunteers were all costumed, and all but one had been prepped by Marcus prior to the show. And no, there was no clucking.

Sunday was wind-down day, so I came in late to find the gaming areas still bustling with people. I watched some LARP training then joined about 30 people to watch show headliner Ron Paulsen and a couple others give the MST treatment to Boris Karloff's laughable "The Ape." (Speaking of MST3K, I made a Gamera/MST jacket specifically for Saturday, and you know who was the only person to comment on it? The parking attendant. Geeks, I am disappoint!) 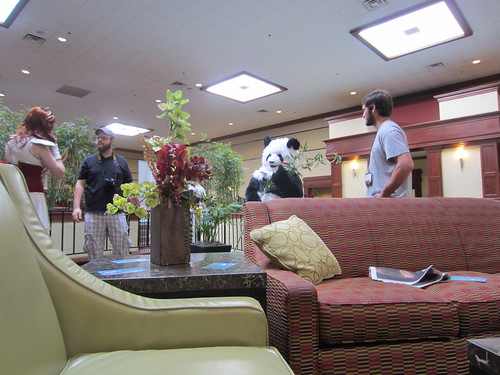