On 5/23 local grunge influenced band The Mexican Knives opened for Mark Sultan at the Lager House. They remind me of The Breeders but breathier. The vocalist has an introverted stage presence complete with a default head tilt and hair hanging in her face.  The guitarist also played with Lee Marvin's Computer Arm and The Readies.  I enjoyed a Velvet Underground cover. The Lou Reed intonations were delivered with craft and sass. A lot of tamborine, snare, and back up singing added a melodic component. The crowd was swaying to the the beat and dancing.

Mark Sultan is a one man band currently living in Toronto, Canada who has traveled extensively worldwide and has played with The Spaceshits., Les Sexareenos, BBQ, Mind Controls, The King Khan & BBQ Show and others. John Spencer covers one of his songs. Mark has an incredible singing range and his songs are an amazing blend of psychedelia, garage rock, doo-wop, early rock n' roll, punk, and avant garde.  The orchestration of sounds,  Beach Boys fuzz, and the mixture of falsetto and low notes were marvelous.  A few gems from his BBQ days were performed. His most current album is called War on Rock n' Roll with artwork by Gary Panter.  Mark told some charming tales in between a few songs and handled a heckler hilariously and candidly. Top notch, inventive and dynamic performance.

On Friday 5/25 I enjoyed a three course meal and a two hour 1980s interactive murder mystery show. The food consisted of breaded chicken, pasta, red skin potatoes, various salads, and rainbow sherbet. Fun and flamboyant 80s clothing was abundant. The performances will be taking place in East Pointe until August 24th. Out of a few hundred attendees seventeen were chosen to be part of the show. I happened on the role of Miss June Perfect which had a Leave it to Beaver essence.  Some other roles were a shy video game champion,  an exercise tape tycoon, and an elderly delusional rock star waiting for his comeback show. Two murders took place and various clues are given out. This is a fun and creative way to meet new people.
Please click on [www.grimprov.com] for more info. 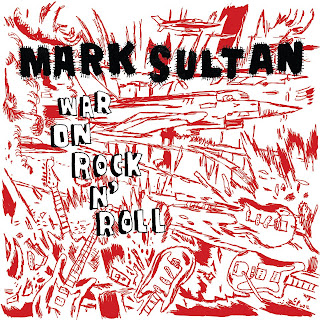