Championship Bout of the 2012-13 Detroit Derby Girls season, the Detroit Pistoffs versus the Grand Prix Madonnas, on May 18th, 2013. 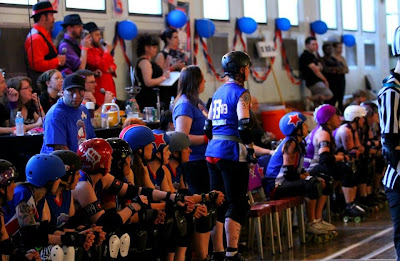 Coming into this bout the Grand Prix Madonnas had an undefeated season. The Pistoffs may have seemed like the underdog of the night, but they won the last two championships, and they have the most championships of any team in the league. On top of that, this is only GPM's third season, after being created as the Detroit Derby Girls' only expansion team. 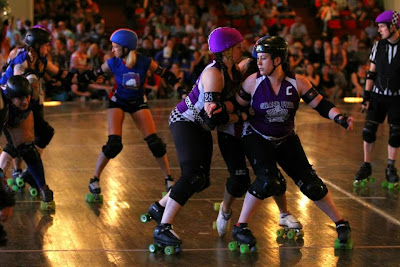 The Pistoffs had a rough start. They didn't score in the first five jams and had two jammer penalties, while the Grand Prix Madonnas gained 26, including a 10 point gain by Lily I. Monster in the 5th jam. The Pistoffs finally scored 3 in the 6th with Mean Streak, while Anomaly sat in the penalty as the Madonnas' jammer. 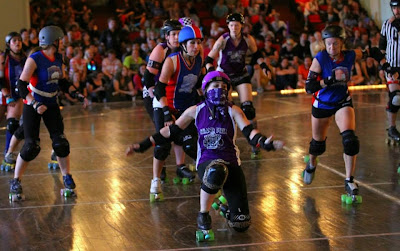 Anomaly made a 10 point play for the Madonnas in the 12th jam, giving them 46 points, while the Pistoffs had only climbed up to 11. Anomaly gave them another 9 in the 15th, and Racer added 9 more in the 16th, and the Madonnas were dominating, 68-15. They were still far ahead at the end of the first half, 75-26.

The second half starting looking very different in the 3rd jam. The Madonnas had Anomaly, their jammer, and 2 blockers sent to the penalty box. This gave Freakin' Rican a lot of room to maneuver. She used it to score 15 unanswered points, and give the Pistoffs their first big play of the game. Combat Cat scored them another 8 in the 4th. Freakin's Rican went back to the jammer line for the Pistoffs in the 5th, and scored them another 19, as Lily served some more penalty time. GPM hadn't scored anything yet in the first half, and they were now only 5 points ahead. A timeout was called. The teams, as well as the audience had to process what had just happened. This reorientation must have worked for GPM, because Racer McChaseHer scored 4 in the 6th jam, giving them their first points of the second half. 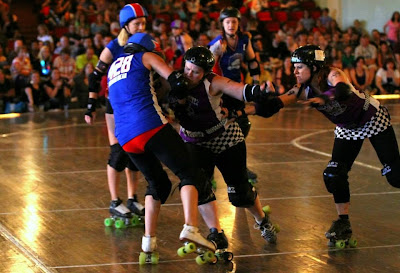 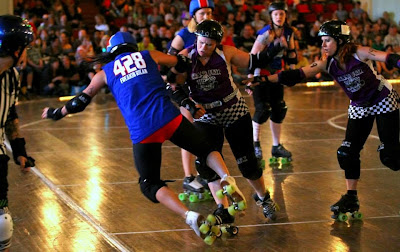 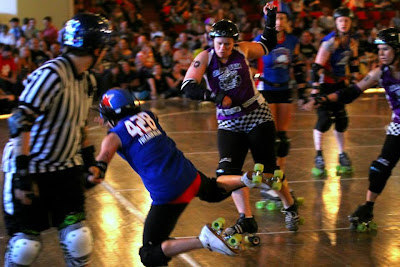 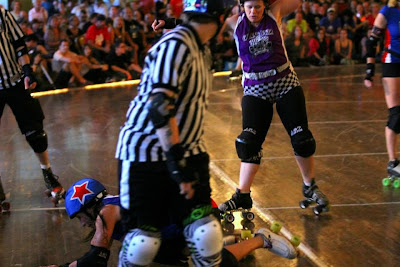 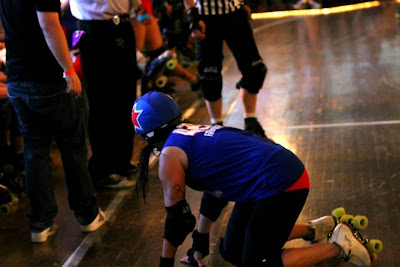 The 9th jam was a big success for the Pistoffs. Racer got sent to the penalty box, and Freakin' Rican scored 15 points for the Pistoffs, putting them ahead for the first time in the bout, 94-83. Racer was still serving out the last of her penalty time just as the 10th jam started, but she got out right away, and gained lead jammer status, while her teammates kept Mean Streak bottled up. Racer would net 23 points, the biggest play from either team that night, giving GPM the lead again at 106-94.

Anomaly and two blockers from GPM sat in the penalty box in the 11th jam, allowing Rican to score 10 for the Pistoffs, but that would be their last big play of the night. The rest of the bout would be settled by Racer. She scored 14 points in the 12th jam, and again in the 15th. The most the Pistoffs scored in any one jam for the rest of the night was 5. Final score, 159-114 for the Grand Prix Madonnas, giving them their first championship.


Detroit Area Dork: What are you thinking right now about that bout?
Kraken Whips: I'm thinking they really wanted it. They really wanted it. When you come off two wins back to back, it's kind of hard to get everybody motivated, like, "we got to keep this". So it took us a while in the beginning of the season to get motivated, and recharged. I think we really showed up in the second half, but it wasn't enough. The penalties kept coming, and bleep happened. You take your wins, you take your losses, and you still have fun.
D: You guys only got 26 points in the first half, what was happening?
K: I think we're just trying new stuff. We're just trying to get our jammers out, trying to block their jammers. It tends to be a little difficult when you're trying to keep things fun, and still intense, hence, funtensity. We're trying to keep things fun. Sometimes, when you get too intense, you lose your focus, and you stop having fun. That's not good for anybody. We try to keep that focus. We really thought about it in the second half, made sure we were having fun, and then we played better.
D: What did you talk about in the locker room at half time?
K: We just talked about how to avoid penalties. We talked about playing together, and keeping each other light hearted, and trying to keep it fun, but intense. Sometimes it's hard to meld those two, but when you do, it's a really good mix.
D: Early in the second half, you had a string of 3 plays where you guys were scoring big, and you started to close that deficit. What were you doing differently to make that happen?
K: Not going to the box as much. I think that when our jammers go to the box, it kills us. Our defense is not as strong as it used to be, because we're still developing newer players to take those blocker positions. They're still developing, they did excellent tonight, and I'm sure they're going to continue to do well next season.
D: How do you think the Grand Prix Madonnas were able to get the momentum back towards the end of the second half?
K: They wanted it really bad because they've never gotten it before, and it's a big achievement for them to go undefeated. So that alone can be enough to build that momentum and carry them through
D: How would you sum up this season for the Pistoffs?
K: I'm absolutely proud of my team. They worked really hard. They still had a lot of fun, and they were really encouraging to one another. That's what builds a team. Playing everybody, playing smart, and having fun. That's a good team.
D: Do you know of any retirements coming from your team?
K: Not that anyone has said. People don't usually announce that until mid off-season. They're like, "oh god, next season is coming, I don't know if I can handle it". People are still on their highs. I'd be able to tell you that closer to the new season.
D: What sort of talents or skill-sets do you think you'll be looking for in the next players draft?
K: In the next draft I think we're going to look for more of a blocker that's really good at speed control. We're going to look for somebody who can play well with the teammates, and not just go off on their own and be a showboat. We're really good at keeping things at an equal level. Obviously there's going to be skill gaps, but we want everyone from the bottom to be as good as the top, and that's what we work for.


Cookie Rumble, Captain of the Pistoffs, in the oddest post-bout interview I've ever had:


Detroit Area Dork: What are you thinking right now about that bout?
Spanish Ass'assin: I'm thinking I couldn't be happier. The team has worked for three years to get to this point, and we finally pulled it off. I really couldn't have asked for more out of the team.
D: In the first half, the other team only scored 26 points. What were you doing to shut them down like that?
S: We were focusing on our defense. We had really tight four person walls, and our first plan was to keep the jammer back, and our jammers knew that they were going to be kind of on their own for a little bit until we could get them some help. We were locking their jammers down, and it was working really well.
D: Early in the second half, the Pistoffs had a three jam streak where they were scoring a lot of points. Did your team start to get nervous?
S: No, for some reason, we couldn't stay out of the box. When you don't have players on the track, and you don't have a jammer on the track, you can't score points, and you can't really stop them very well from scoring points. So that's what happened.
D: Did your team call the timeout after that three jam streak? Did you need to reorient yourselves?
S: Yeah, we were trying to throw off the flow of things, and regroup, and throw them off the streak that they were on. It was just a good sports strategy.
D: Later in the second half, you regained the momentum, took the lead back and widened it. What did the team do to pull that off?
S: I think we finally got all four players back on the floor. We adjusted a little bit. Figured out what they were calling penalties on, and trying to counter it so we wouldn't get called more on them. Once we had our players back on the floor, we kind of calmed down, went back to what we were doing in the very beginning, and tried playing that way again. Thankfully it worked.
D: There seemed to be a lot of jammer penalties.
S: Yeah, I agree.
D: Was there a certain trend among all of those penalties?
S: No one really likes going to the box, but I did notice that there was a lot more penalties this bout. I don't know if things are just getting called tighter. I'm not really sure. This was definitely a higher penalized bout than we're used to at least.
D: How would you sum up this season for the Grand Prix Madonnas?
S: This season was pretty much the cherry on top of everything. We just started 3 years ago. We came in third place the first year. Second year we came in second, so this year we knew that we had to go for that first place win. We've been building, learning, strategizing, and doing everything that we could. We finally wrapped it up, put a bow on it, and brought it home.
D: What talents and skill-sets are you going to be looking for in the draft? Do you even get draft choices when you're the champions?
S: You do, but you get the last pick of the first round because you came in first. We'll get number five in the draft, and it'll go on from there based on numbers. Depending on the turnover this year, we've got some players that have been skating for a long, long time. I'll be interested to see who all stays around, who might be moving on with their lives, and maybe doing something after derby. We'll see. I hope we don't lose too many of them. We might lose a couple of our girls.
D: Do you know of any retirements yet?
S: I could probably guess, but I don't want to, because I don't want them to go away.

All photos by Dan Bachorik

I'm a dork, I live in the Detroit area, and sometimes I take blurry photos on an outdated camera
Posted up by Detroit Area Dork on 29.5.13