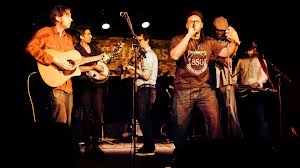 
Send an email to motorcityblog@earthlink.net for your chance to win a pair of tickets or a CD

Gangstagrass goes back to the future with Rappalachia, or, you might say, Jay-Z meets Ralph Stanley. Blending bluegrass and hip-hop seems like an unlikely recipe for success, but don’t tell that to Rench, the mastermind behind the highly successful rap ’n’ grass project Gangstagrass. When he was going to grade school, recess was a time of breakdancing on cardboard to RUN-DMC. But at home, the records on the stereo were Willie Nelson and Johnny Cash. That musical mash-up made a lasting impression and sent Rench on a cross-country journey to play country-flavored hip-hop in dive bars. "There are a lot more people out there with Jay-Z and Johnny Cahs on their iPod playlists than you might think," says Rench. You might have heard Gangstagrass's "Long Hard Times to Come" as the theme of the FX series "Justified"—now hear them in person.