Recap: Sharon Jones and the Dap Kings at The Crofoot

Sharon Jones and the Dap Kings performed at The Crofoot on Saturday, May 14th, with Black Joe Lewis & the Honeybears. 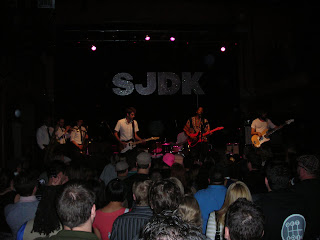 Black Joe Lewis & the Honeybears were the only opening act that night. They consider themselves a blues band, but to me the tempo sounded fast enough to be more in the realm of funk. It might be hard to tell from this photo, but Joe is the guy wearing a dashiki, while everyone else in the band is wearing matching white shirts. During one interlude between songs Joe said, "Most people think that we're a shitty knock-off of Sharon Jones and The Dap Kings. I'm here to prove that we're just shitty". They ended their set with a cover of "Bird is the Word". 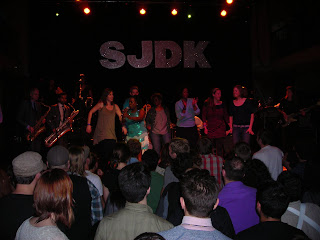 Sharon Jones and the Dap Kings have got to be one of the best funk/soul revivalist bands around. They're so old school they refuse to even touch anything that's digital. The best part of a Sharon Jones show is when she brings ardent fans on stage with her. She brought men up just one at a time, and brought women up in groups. The first guy she brought on stage seemed very self conscious and danced awkwardly. Later on in the night, the second guy she brought on stage hammed it up, as if he had been rehearsing that moment for the last several weeks. Jones would bring women from the crowd onto the stage just as a song about either a woman's travails or a woman's heartache was starting up. As the song was winding down, she'd have each woman dance themselves off the stage. I really dug how Jones would sometimes tell little anecdotes before a song, as a way to delve more into its premise. That really worked with the song "Mama Don't Like my Man". 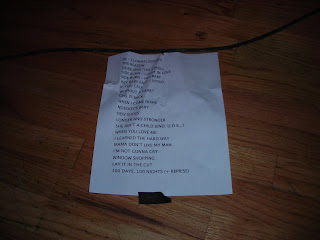 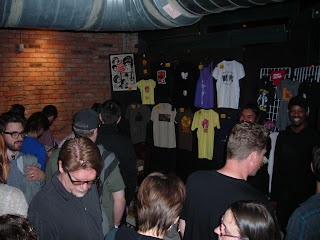 I'm a dork, I live in the Detroit area, and sometimes I take blurry photos on an outdated camera
Posted up by Detroit Area Dork on 19.5.11