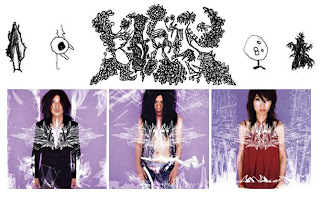 you know the drill - email motorcityblog@earthlink.net for a set of tickets to check out the legendary BORIS at the stick on 10/22 -- keep your eyes peeled for some swag closer to the show


Boris has long been celebrated for their rare ability to reinterpret a multitude of esoteric musical genres into a sound uniquely their own. New Album finds the intrepid Japanese trio etching their own post-noise, extreme pop niche with some of their most accessible and melodic music being equally their most subversive. Where their two previous albums, Attention Please and the all new Heavy Rocks -- both released by Sargent House on the same day, May 24th, 2011 -- offered divergent expansions to their sonic palette, New Album is the culmination of the band's ongoing experimentation that catapults its ferocious sound headlong into new territory.

The 10-track New Album features a handful of revamped versions of songs from both Attention Please and Heavy Rocks (2011), along with a few new tracks, hyper-charged and rearranged with the assistance of radical Japanese producer Shinobu Narita resulting in a sound that could best be described as extreme pop. It shares both the hummable heft of Nirvana's Nevermind and the entrancing, droning haze of My Bloody Valentine's classic Loveless, run through two previous decades' worth of electronic exploration and the merging of underground noise with sugary mainstream gloss. Boris usually self-produce their recordings, so working with a popular producer is quite an exception. The disc was first issued as a Japan-only release in March 2011, but this rearranged and remastered worldwide edition features a reorganized track listing and four songs not available on either Attention Please or Heavy Rocks.

Boris formed in the early '90s as a four piece just-for-fun endeavor with the sonic template of influences like Melvins and Earth. By the time of its 1996 debut as a trio Absolutego (later released in the US via Southern Lord in 2000), Boris had already hit its stride in creating unique ground-rattling heavy, melodic music. The group, bassist/vocalist Takeshi, guitarist/vocalist Wata and drummer/vocalist Atsuo went on to release nearly 20 studio albums, as well as numerous collaborative albums -- including projects with Merzbow, Sunn0))), Ian Astbury and Michio Kurihara of Ghost (who also currently tours with the band as second guitarist and frequently guests on albums) -- EPs and singles on various labels throughout the world.