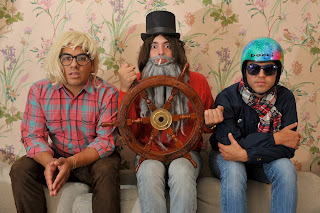 Jacuzzi Boys
October 15th, Saturday, at PJ's Lager House
The Jacuzzi Boys’ practice space is like most any other -- crammed with gear along with one of the guys’ record collections. But their band room happens to be located in a trailer tucked just inside Bill Baggs Cape Florida State Park on gorgeous Key Biscayne, FL. Just a few feet from their amps: tropical paradise. This is an area home to weird animals and buttonwood trees, located on an island just outside of Miami. “Miami is not known for producing many good bands,” bassist Danny Gonzalez concedes. “So, quite frequently we get asked, ‘would you ever consider moving?’ Our answer is always, ‘No!’ This is where our friends and family are from. Miami is such a part of the Jacuzzi Boys, as important as any musical influence.”

The Jacuzzi Boys are guitarist/vocalist Gabriel Alcala, drummer Diego Monasterios, and bassist Danny Gonzalez, three dudes from South Florida, bright as neon and fun as hell. After forming the band in 2007 and accruing a handful of 45s, the group released the LP No Seasons on Florida’s Dying (located in nearby Orlando, FL) in 2009. Now, in 2011, we have Glazin’ – their second full-length, and the first for Hardly Art.

For Glazin’, the group traveled to Key Club Studios in Benton Harbor, MI where they spent twelve full days recording and mixing. The Jacuzzi Boys used this as an opportunity to dig deeper into the production of each song. “If the first record was the Everglades, the follow-up is Dadeland Mall,” says Alcala. This is also true sonically – while No Seasons was a primal wallop, Glazin’ has the slight sheen of a studio environment. Moving beyond the beauty and harshness inherent in a life spent within a single climate, Glazin’ instead offers a take on the culture that surrounds that environment: girls, cruising, air conditioning, and “raspberry feelings"....
You can download an MP3 of Automatic Jail here
Posted up by Detroit Area Dork on 4.10.11