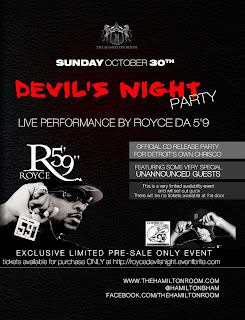 Royce da 5'9" and ChrisCo Perform LIVE at The Hamilton Room

Royce da 5'9", a successful solo artist, is best known for his longtime association with Eminem. Most recently, the two artists released their debut EP as the hip-hop duo Bad Meets Evil. Since its release in June 2011, the EP Hell: The Sequel has been met with much positive sentiment, debuting at the top the Billboard 200 charts. Royce da 5'9" is also one of four members of the supergroup, Slaughterhouse, alongside rappers Joe Budden, Crooked I and Joell Ortiz.

Up-and-coming hip-hop artist and Brother Rice High School graduate ChrisCo, will also be on hand to open the show and celebrate the release of his latest EP, How Does It Feel. How Does It Feel was produced entirely by Alchemist, a noted producer, rapper and official DJ to Eminem. Featuring hip-hop industry household names such as Obie Trice, Young Knox, Crooked I and Jon Conner, the EP has garnered attention from several music blogs and publications. While this is the first time ChrisCo will open for Royce da 5'9," the two have recorded together in the past.

"We are excited to host two incredibly talented artists for this first-of-its-kind, underground concert. The Hamilton Room is a unique venue and we're lucky to have a national touring act showcased to an intimate crowd," said Jon Robinson, General Manager of The Hamilton Room. "There is no other venue of this size that Royce would consider for a show of this kind but due to the upscale nature of our venue and our longstanding relationships with Birmingham-based VIPs, athletes and celebrity clientele, not only did he agree to headline but Royce is looking forward to such an intimate performance."

There are a limited number of tickets available for the Grey Goose Vodka-sponsored Devil's Night Halloween party performance. Tickets are available exclusively at http://roycedevilsnight.eventbrite.com for $28 (general admission.) There will be NO ticket sales at the door and attendees must be over the age of 21. Capacity is limited thus, early ticket purchase is encouraged. In addition to the headlining artists, several surprise guests will be in attendance. To make a VIP booth reservation, email VIP@thehamiltonroom.com.