Recap: Lightning Love at the DIA

Lightning Love played at the Rivera Court of the Detroit Institute of Arts on Friday, October 10th. 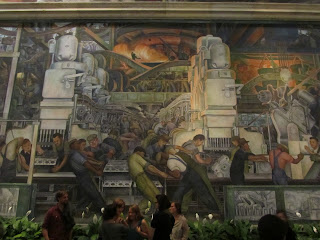 The Detroit Institute of Arts has an ongoing series of events called "Friday Night Live", where musicians perform in the Rivera Court. Diego Rivera spent years painting this mural, and it only seems fitting to have live art surrounded by spectacular two dimensional art. 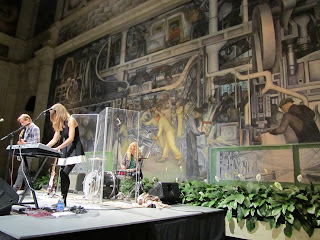 The DIA books a wide array of musical acts for this, and last Friday night they had Lightning Love. If I had to classify Lightning Love, I'd call them twee-indie-pop, even though it's possible that no one likes to have their music called twee. I've seen this band play at a lot of different venues, but nothing could compete with the backdrop of a mural done by a world renowned artist. 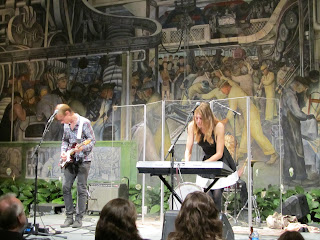 They played a set of older material at 7, and a set of newer material at 8:30. I only caught the second set, and I recognized more of the songs than I expected to. I guess I'm not as out of date in regards to their material as I thought I was. 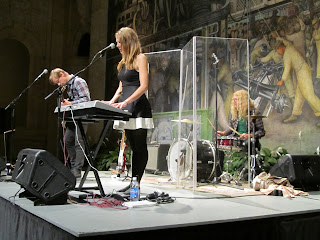 There must have been a series of assassination attempts against drummer Aaron Diehl, because he sat behind a bulletproof glass shield to protect him from sniper fire. My other theory is that its placed there to prevent the percussive sounds from echoing too badly. In such a big room that wasn't designed for acoustics, the snare drum and hi-hat cymbals often had a cavernous echo, and it might have been worse otherwise.

On a side note, near the gift shop the DIA gave people sugar skulls to decorate in preparation for Dia de los Muertos. 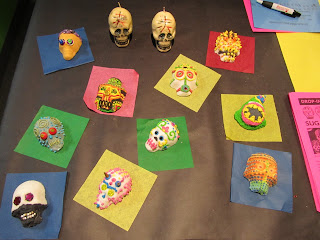 They're contining it for the next two Fridays, so you still have a chance to make one of your own.

I'm a dork, I live in the Detroit area, and sometimes I take blurry photos on an outdated camera
Posted up by Detroit Area Dork on 10.10.11