We wanted to remind you about the upcoming Mister Heavenly show 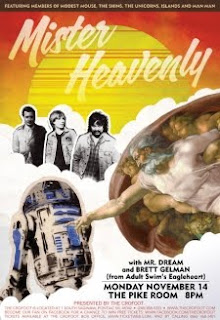 Mister Heavenly is an indie rock supergroup consisting of Honus Honus of Man Man, Nicholas Thorburn of Islands and The Unicorns, and Joe Plummer of Modest Mouse and The Shins. They recorded their first album in late 2010, finishing the year with a string of tour dates supporting Passion Pit, joined by Michael Cera as their touring bassist. In January 2011, they released two songs, the eponymous "Mister Heavenly" and "Pineapple Girl". Their first album, Out of Love, was released August 16, 2011.

MISTER HEAVENLY with MR. DREAM and BRETT GELMAN (from Adult Swim's Eagleheart) at the Pike Room