PHOTOS: Deadmau5 @ The Fillmore 10/21 by RebeccaMich

Back to back shows in Detroit is relatively uncommon for an international act these days... unless you are electronic superstar Deadmau5. And every single time the Mau5 (Joel Zimmerman) comes back through, he brings a show bigger and better than before!

The last time we hosted Deadmau5, his new LED "cube" was stealing the show.

This time, aside from the original cube, more lazers and LED, there were 3 more "Q Bert" style cube clusters (one on each side and overhead), adding more pow into the already bright and flashy stage set up. 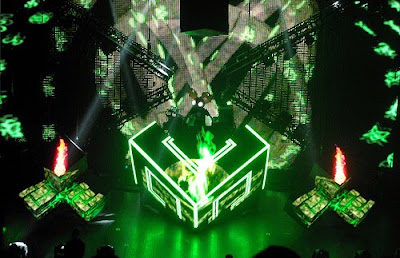 The show always starts out heart pounding and energetic. DJLG, with me for the night, was quite concerned about the movement up in the balcony. The crowd jumping to the beat felt like a wild earthquake and that we might fall through at any moment.

Deadmau5 also sported his new "Cheese Head" for the night. After encouraging all fine and street artists, graphic designers and illustrators to submit their most creative and unique designs for the ‘Design the Next Mau5head’ competition, Deadmau5 picked a winner. (Designed by Lance Thackeray from the U.K.)

Also very mentionable this time around was SOFI. He brought her on tour to sing "Sofi Needs a Ladder" and "One Trick Pony" live. Though her time on stage was short, she was super cute and really worked that huge crowd. It was a nice touch and really added to the "performance" aspect of the show. She also appears on the Deadmau5: Live @ Earl's Court DVD. I mentioned before, but will again, PICK THIS UP. It sells for under $20 (less than half your ticket at the show...much less than half if you got the $150 ones). The stage show is huge, and if you have ever gotten the chance to see him live, you know why it's worth it to have this pro- video. If you haven't gotten the chance, this really is a close second. You do feel like you are right there, with your Mau5 ears and all :)