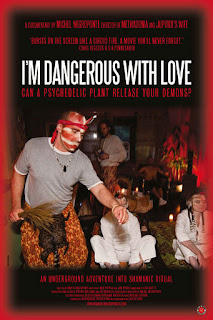 
The film will be followed by a Q & A session with Dimitri Mugianis and director Michel Negroponte.
I'm Dangerous With Love is about addiction and rehabilitation, activism and shamanism. It's the story of Dimitri Mugianis., who started out as the heavily addicted front man for the [Detroit] band Leisure Class, then ended his long drug and alcohol addiction five years ago with an experimental treatment that used the hallucinogen ibogaine.

African shamans have used ibogaine in their rituals for centuries, but in the U.S. it is a Schedule 1 controlled substance. Dimitri now very illegally takes addicts through the same detox that he says saved his life. I'm Dangerous With Love is an underground adventure that traces Dimitri's risky journey as he treats desperate drug users. He is a man of edgy energy going from one addict to the next without stopping to catch his breath.

But then one session goes bad in a remote snowed-in Canadian home, and a quiet young man almost dies. Dimitri has to decide whether or not to continue his mission. Is it serving the addicts or just releasing his own demons? Dimitri travels to Gabon, West Africa, to consult with Bwiti shamans, and puts himself through a punishing iboga initiation in search of guidance.

"Bursts on the screen like a circus fire. A movie you'll never forget." --Chris Hegedus and D A Pennebaker