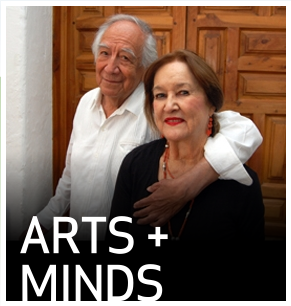 Artists to talk about their lives, work, and time with Rivera and Frida Kahlo

Detroit, MI – The Detroit Institute of Arts (DIA) presents “Working with Diego Rivera: Recollections by Rina Lazo and Arturo Garcia Bustos” on Wednesday, Oct. 19 at 6:30 p.m. in the DIA’s Detroit Film Theatre auditorium. The program is free and open to the public.

As young artists in Mexico, Rina Lazo and husband Arturo Garcia Bustos studied and worked with Diego Rivera and Frida Kahlo. They will discuss their lives, their time with Rivera and Kahlo, and their work. Following the presentation, Lazo and Bustos will take questions from the audience.

The lecture is free, but tickets can be purchased to a 5:30 p.m. cocktail reception with the artists in Rivera Court for $40. Tickets for the cocktail reception and a seated dinner at 7:45 p.m. are available for $100. To purchase tickets, call 313-833-4025 or email rgoodwin@dia.org.

The event is co-sponsored by the DIA auxiliary Associates of the American Wing, the Consulate of Mexico in Detroit, the United Auto Workers (UAW) and the International Brotherhood of Teamsters.

Rina Lazo and Arturo Garcia Bustos have been active muralists, painters, and printmakers since the 1940s. Born in Guatemala City, Lazo moved to Mexico City in the mid 1940s to study with Rivera and Frida. After completing her studies, she worked as Rivera’s assistant from 1947 until his death in 1957. Rivera once described her as “a painter of great talent. My beloved friend, my right hand, the best of my assistants.” Her murals can be seen throughout Mexico and Guatemala. Lazo was also an influential teacher who taught at the National Institute of Fine Arts in Mexico City for more than 30 years.

Bustos, born in Mexico City in 1926, began his studies with Rivera and Kahlo in 1942, quickly gravitating to Kahlo with whom he studied throughout the mid 1940s. During his years with Kahlo, he became known as one of “los Fridos,” four young artists famous for their devotion to Kahlo. In 1947 Bustos joined the Taller de Grafica Popular (Popular Graphic Workshop), an important 20th-century collective of Mexican printmakers, where he helped found the group Artistas Jovenes Revolucionarios (Young Revolutionary Artists). A muralist and painter, Bustos is especially well known for his prints. A retrospective of his graphic work was recently held at the National Institute of Fine Arts in Mexico City.

To commemorate their appearance at the DIA, Bustos created a special signed and numbered limited edition of his print Earth in Farm Worker’s Hands (Tierra en manos campesinas). The prints are hand-screened on high-quality archival paper and cost $100 if purchased prior to the event. They may be ordered from Farm Worker Print, The Campaign for Migrant Worker Justice, (419) 243-3456, ext. 1 or info@cmwj.org. Prints may also be purchased at the event for $130. Proceeds will support the Campaign for Migrant Worker Justice.
Posted up by DC in Detroit on 17.10.11