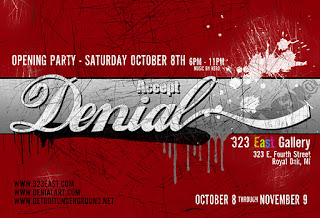 It's a rare and happy coincidence when the title of an art exhibit achieves a two-fold purpose - to draw attention to the creator of the art itself and (more importantly) to bring into focus the personal philosophy that drives him to create.

Denial is the chosen name of a contemporary artist based in Canada whose concerns are both local and global. He has a sense of humor, a value system that values truth above all, and an insightful candor when it comes to a number of political and social issues.

And it is that candor that is nicely reflected in the first word of the deliberately (and deliciously) ironic title that 323 East chose for Denial's forthcoming show there. The pieces - done in mediums ranging from video installation to 3-dimensional sculptural "provocations" - are all new.

The theme of the show, however, is not new - it is an evolved one.

How does one maintain a sense of identity in a society that is slowly being suffocated by an animus of pure commercialism? Indeed, is there even a need for personal identity when nearly every facet of a person's existence is shaped by his or her role as a consumer. Notable exceptions around the globe notwithstanding, man has never been so free as he presumably is now. However, this liberty and self-awareness is practically a dead issue - you cannot "buy" with a creed and character is not a thing taken into account by a credit rating.

The dystopian visionaries who predicted all this (the ones still living anyway) are probably smiling now - albeit sadly. And like this eminently skilled and (may we use the word?) angry artist, they probably appreciate the call to action that is coded within the show's name.

DENIAL is two things in one - a superb street artist and incontrovertible proof that our Canadian neighbors are not mere sideline onlookers to this burgeoning scene. His pseudonym is "an alphanumerical phonetic mix-up representing his first name" and his goal as a mixed media and graffiti designer is to lash out at the stale decadence of mass advertising, politics, and media entities.

When asked about this new collection Denial said "I will be exploring nostalgic branding as well as pop culture iconography. The de-brainwashing of social messaging and signage that needs to happen before real change can occur. This exhibition is an acceptance that we are in denial about serious world issues."

This event is during Detroit Gallery Week.
Posted up by DC in Detroit on 6.10.11