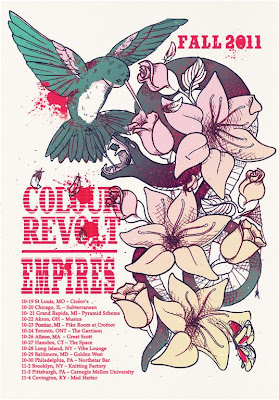 After a major summer tour with Taking Back Sunday, they’re back on the road for their fall tour that will stop in Detroit at the Pike Room on Sunday, October 23rd.

The band’s touring in promotion of a newly release deluxe edition of their critically acclaimed CD The Cradle. Check it out here- http://dualtonerecords.net/colourrevolt/
And earlier this year front-man Jesse Coppenbarger also released his own solo album, El Obo.

The band is offering up a pair of tickets AND a limited edition tour poster as shown above
email motorcityblog@earthlink.net to enter to win