Child Bite Is Going to Get Wild In the Streets 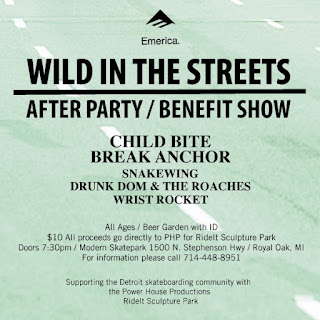 The Wild In the Streets skateboarding event is taking place tomorrow at noon in Hart Plaza in the heart of Detroit.  Dozens, dare I say hundreds? Of skaters from all walks of life will gather and skate for the community, exercise and the just for the damn fun of it. The event will culminate in the evening around 7:30pm at Modern Skatepark in Royal Oak  There will be a beer tent and a number of bands playing, including Child Bite, who are fans of skateboarding as well. I spoke to lead singer, Shawn Knight about the event:

MCB: How did Child Bite get involved with Wild in the Streets?
SK:  We were asked by a member of Break Anchor, who is also playing. They got involved and thought to ask us maybe because we got some skateboards made up recently.
MCB: The event location was withheld until recently…
SK: Yeah, I think they hold up on that until the last minute just to avoid getting shutdown. The part where the bands are playing does have a location at Modern Skatepark in Royal Oak. The main event is this big skateboarding bonanza, and then afterwards, the fundraiser part is where we are playing.
MCB: I never really thought of Detroit as a big skateboarding city…
SK: Myself and all my buddies in bands and what not all skateboarded at some point in our life, even when we were just 13 years old. It just makes sense with punk and everything else to do it more. As far as Detroit, when we got our boards made up we went to some skate shops in the area, and there are several places around here that have been surviving so there’s enough of a culture to keep them going. There’s more skate shops in the area then there are record stores for whatever that says.
MCB: What was your worse skating injury?
SK: I don’t know, I was pretty young when I was skating and kind of a pussy about it. I probably skinned a knee or a sprained a wrist at most. I would stand at the top of a ramp in my driveway and always skate towards the grass. I’ve got more injuries from other things in life (laughs).
Shawn and I talked about other things like the posters he designs and Child Bite’s latest record, Monomania, which is a manic mesh of punk and metal. If you dig Jesus Lizard and some of the wilder things Mike Patton has done you should check into it. After the Modern Skatepark show, Child Bite will be playing at a number of shows in the local area including the Pig & Whiskey BBQ in Ferndale on July 15.