Saturday: Amy Gore and Her Valentines 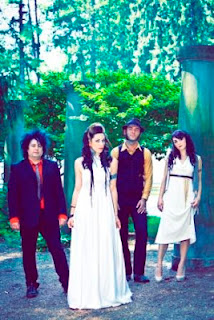 Amy Gore and her Valentines have pure Detroit pedigrees in spades – their musical backgrounds give them the chops they need to rock, but it’s the on stage synchronicity that drives the band. After spending the spring putting the finishing touches on their first full length, they will play a string of midwestern dates including One Eyed Bettys in Ferndale June 23rd.

Singer/songwriter/guitarist Amy Gore has been the heart and soul of bands like Gore Gore Girls and Gorevette, producing critically acclaimed albums and performing with icons like The Cramps and Blondie. In early 2011, she’d written a batch of new songs and booked a one-off show at Detroit’s Blow Out festival to perform them. Originally named Amy Gore and the Squires, Gore assembled Jackson Smith (T-Bone Burnett’s Speaking Clock Revue, Electric Six) on guitar, Leann Banks (the Von Bondies) on bass and Joe Leone (Grayling, Fletcher Pratt) hitting the skins. It became obvious on stage that the band’s chemistry was too potent to walk away from. "We had no expectations beyond that first show, but the chemistry on stage was instant and powerful. It was as if everyone in the room knew something special was happening. Afterwards, Jackson called me to say they wanted to continue as a real band, he and Joe were really impressed with my songs and the vibe on stage. I couldn’t ask for better band mates, so we decided to move forward.”

A name change followed (they dubbed it the Valentines following a particularly prolific songwriting session Gore had over that weekend in February) and the band began recording and playing high profile shows. In April of 2011, the band entered the studio with Al Sutton (Kid Rock) at Rustbelt Studios. Gore and the band have stylistically evolved from her roots in the punk/garage world, the Valentine’s sound is pure rock n’ roll with power pop touches; the songs are unbelievably infectious. Smith’s guitar work gives these songs their edge – his bluesy solo on “So Lost Now” rips through the pretty vocals and wouldn’t be out of place on a T Rex album.

Amy Gore and Her Valentines came together organically and quickly gelled into a band that sounds like they’ve spent years together. Their dramatic stage presence demands attention – great song craft and unforgettable melodies will keep audiences in thrall long after that first glance.