DO NOT MISS: The Polyphony Youth Orchestra - Detroit Shows Solidarity for Young Arab and Jewish Musicians from Israel 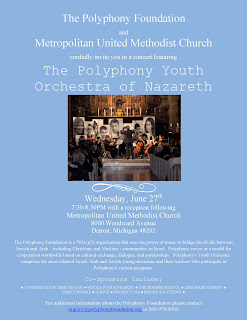 Next week, the greater Detroit area will host a very special group of young interfaith musicians from Nazareth, Israel. The Polyphony Youth Orchestra, comprised of Israel's most talented young Arab and Jewish musicians, will perform two concerts, one at Congregation Shir Tikvah in Troy on June 25 and another at Metropolitan United Methodist Church in Detroit on June 27.

The Polyphony Youth Orchestra is supported by Polyphony Foundation, a non-profit that aims to bridge the divide between the future leaders of Israel's Arab and Jewish communities by using music to transcend historic cultural and social boundaries. Their efforts have been recognized by Yoko Ono Lennon "as a very powerful and effective beginning towards Peace" as she awarded Polyphony the Yoko Ono Lennon 2012 Courage Awards for the Arts.

Polyphony was co-founded in 2011 by New York financier Craig Cogut and his wife Deborah Cogut, and renowned concert violinist Nabeel Abboud-Ashkar, who is based in Nazareth.

Polyphony's programs impact more than 2,000 Arab and Jewish youths, starting with elementary school outreach and leading up to integrated orchestras that allow teenage musicians to learn, experience and perform together.