UPCOMING: The Facts of Life: The Lost Episode @ Ringwald Theatre 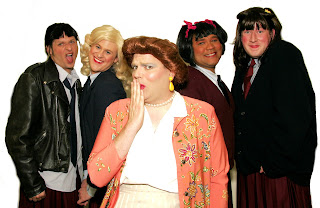 Join The Ringwald Summer “Camp” for The Facts of Life rerun!
The hilarious parody returns to Ferndale for a five week summer run

After a sold-out run in the summer of 2008 (and still the most requested show by audience members) the wildly popular The Facts of Life: The Lost Episode returns to the Detroit area! Written by Jamie Morris, creator of the LA Weekly Theatre Award-winning comedy Mommie Queerest, Facts features an all-male cast as the girls from Eastland.

The lost episode in question is titled "The Best Little Whorehouse in Peekskill." Budget cuts are threatening to force Mrs. Garrett (Joe Bailey) to leave Eastland. But like the theme song states, “You take the good, You take the bad” and Blair (Richard Payton), Tootie (Jerry Haines), Natalie (Joe Plambeck) and Jo (Jamie Richards) are willing to do anything to raise enough money for her to stay. Anything.

The Facts of Life: The Lost Episode features the same talented cast from the 2008 production that includes Joe Bailey, Richard Payton, Joe Plambeck, all of Ferndale, Jerry Haines of Royal Oak, and Jamie Richards of Birmingham. Joe Bailey will also direct.

The Facts of Life: The Lost Episode opens Saturday, July 14th and plays through Monday, August 13th at 8pm on Saturday and Monday nights with 3pm Sunday matinees.

Ticket prices are $20.00 for Saturday performances, $15 for Sunday shows, and Monday nights are HALF OFF the original ticket price at only $10 a ticket. Tickets can be purchased at www.TheRingwald.com or at the theatre box office. The Ringwald box office opens 45 minutes before performances and tickets can be purchased with cash or Visa/Mastercard.

The Ringwald opened their doors five years ago on May 11, 2007 with Fatal Attraction: A Greek Tragedy. Quickly, The Ringwald became a mainstay of Detroit’s theatre community. Past Productions include: Thank You For Being a Friend, The Bad Seed, The Divine Sister, The Book of Liz, Rent, and Love! Valour! Compassion!. The Ringwald was named 2009 and 2012 Best Theatrical Troupe by Real Detroit and Best Place to See Local Theatre in 2010, 2011 and 2012 by the readers of Metro Times.
Posted up by DC in Detroit on 25.6.12