The Flight of The MynaBirds

This past Sunday the rock gods shined upon me and led me to The Mynabirds at Schuba’s which is a small little venue in Chicago. I had a general idea what I was in for because I heard some of tracks on youtube and Pandora, but lets be honest just cause you put out a great studio record don’t me dilly to me. Everybody knows any up-incoming band really shows there worth in salt up on stage and not in the studio. Well The Mynabirds shined like crazy on Sunday , lead singer Laura Burhenn sang her ass off and got the house rockin’ with music inspired from the backbone of rock from the 1950s - 70s with a twist of something fresh and exciting.

Its not often that I go see a band, and get so into them that I need to push my new found discovery onto others to the point at which it almost becomes my life mission. Knowing full well that I will not rest until the message is delivered to every person I know. I’m not talkin’ just my personal friends and co- workers here. It’s to the point where I’m even making sure the bag lady on the train sitting next to me, with every single item she owns itemized in three market carts how awesome The Mynabirds are. Sure she may be two begging sessions away from a life off the street, but she may just wanna hold off another week and buy The Mynabirds General album instead, or she just may never find that salvation she searching for.

Yes its weird and kind of creepy in a jehovah witness, bible pusher, “ hey little girl want some candy kind of way”. But I don’t give a shit, people need to be saved from lame stale music. Its just a fact. 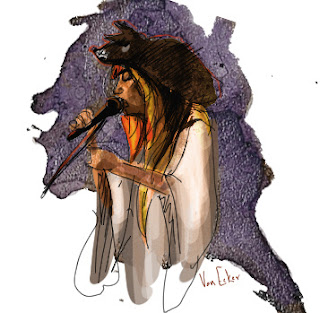 The only thing I could complain about is that the show wasn’t nearly long enough to satisfy my new found Mynabirds obsession, and Ms, Burhenn rocked out so hard that it was really hard for me to capture her essence in any of my sketches..but man was it a freakin’ awesome show. This band is going to go somewhere, and it won’t be small clubs and festivals forever. The Mynabirds are going to be rockin' huge arenas across the globe soon. But before they hit it big why not catch them now while there still underground, and you can be the one to introduce them to all your now-it-all hipster friends, and the barista at your local Starbucks with a handlebar mustache and the multi-colored fixed gear bicycle.

Posted by Von Ecker
Born and raised in the suburbs of Detroit, Von Ecker has been painting and showcasing his work for the last 10 years.﻿  The CCS Alumni now works and resides in Chicago and on occasion attends events to report, review and create custom artwork for MCB
Posted up by DIETROIT on 20.6.12