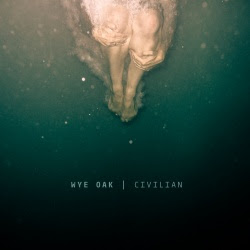 MCB has a copy of the latest vinyl release from Wye Oak who just started out on tour promoting the new record Civilian and will be playing the Royal Oak Music Theatre on October 8th .... email motorcityblog@earthlink.net for your shot to win ...bonus round of a pair of free tickets is in the works and check out the new video HOLY HOLY here


Wye Oak wrote what became Civilian between December of 2009 and July of 2010. The songs “are, as a whole, about aloneness (the positive kind), loneliness (the horrible kind), moving on, and letting go (of people, places, and things),” lyricist/guitarist Jenn Wasner reveals.

After recording and mixing the previous two albums themselves, Wye Oak brought in mixing engineer John Congleton (St. Vincent, Shearwater), who played a pivotal role in the sound of Civilian. “JC definitely pushed us into some exciting and sometimes scary new territory,” multi-instrumentalist Andy Stack says. “It was the most that Jenn and I had ever relinquished control of our music to someone else, but it gave us a chance to step back and see the big picture, whereas on previous recordings we got embroiled in the technical details.”

Civilian is a kind of 21st-century folk music, imbued with dense shoegaze guitars, nearly melodic rhythms, and impeccable splashes of electronic color. Without leaning on conventional structure, the songs beguile with fascinating chords and melodies, Jenn’s voice and riveting lyrics, mesmerizing rhythms, and an intoxicating aural landscape. Just as good writing has meaning between the lines, Civilian has meaning between the sounds: the combinations of harmonies, timbres, and words summon vivid and ineffable associations just beyond reach.

Jenn sums up the meaning of the album saying, “this collection of songs is called Civilian because I believe everyone wants to be normal, but no one truly is.”