Detroit Revealed: Photographs 2000–2010 at Detroit Institute of Arts
Detroit artists, others share insightful look at Detroit over past decade 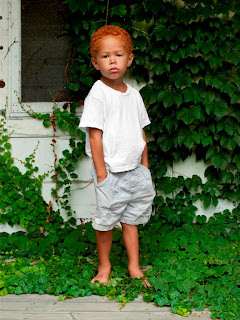 Detroit’s architecture, neighborhoods, people and auto industry are among the subjects included in Detroit Revealed: Photographs 2000–2010, on view Oct. 16, 2011–April 8, 2012 at the Detroit Institute of Arts (DIA). The exhibition is organized by the Detroit Institute of Arts, with support provided by Quicken Loans Inc., and is free with museum admission. Support for the catalog has been provided by Furthermore: a program of the J. M. Kaplan Fund.

Detroit Revealed provides windows into the experience and meaning of Detroit in the first decade of a new millennium, and explores recent photographic practice grounded in the character of the Motor City. The exhibition presents portraits, architecture and documentary photographs and videos by eight artists inspired by Detroit. The artists shed light on life in the city during a time characterized by unique challenges that continue to influence the landscape and society of Detroit in the post-automotive era.

The artists were selected for their diverse and critical perspectives, ability to uncover what lies beneath the surface of life in Detroit and the importance of the city to their artistic practice. They see Detroit as a challenging place of dramatic transformation. Their work appears together for the first time in a deliberately eclectic and sometimes contradictory mix, with subjects ranging from the factory to the community farm, to the vibrant neighborhoods’ ethnic enclaves. 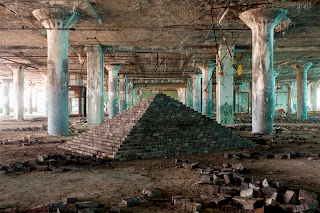 Featured Artists
Michelle Andonian (born 1958, Detroit, Michigan)
For more than 20 years, editorial photographer and photojournalist Michelle Andonian has documented Detroit’s changing auto industry. In 2004 she completed the series Reinvention: Rouge Photographs about the changeover of manufacturing operations and car models as well as massive modernization and greening initiatives at Ford Motor Company’s River Rouge Plant in Dearborn, Michigan. Andonian created more than 2,000 images of what was once one of the Detroit-area’s, if not the world’s, most celebrated and infamous automobile factories.

Dawoud Bey (born 1953, Queens, New York)
Dawoud Bey has worked with high schools throughout the U.S. to create portraits that investigate the identities, lifestyles and diversity of American teenagers. As a DIA artist-in-residence in 2003 and 2004, Bey produced Four Stories, a series of portraits and a video featuring teens from Detroit’s Chadsey High School. Four Stories illuminates many of the concerns and issues facing contemporary teens in southwest Detroit, one of the city’s most ethnically diverse neighborhoods.

Carlos Diaz (born 1953, Pontiac, Michigan)
In 2010, Carlos Diaz photographed the Latino community in Detroit’s Mexican Town. His pictures of vibrant homes and gardens as well as formal portraits of its residents are part of his series Beyond Borders: Latino Immigrants and Southwest Detroit. Diaz has stated: “My intent is for the faces in these portraits to read as a road map of the individual immigrants’ experiences, their unique set of circumstances and the story of their ‘journey’ from the border to the north.”

Scott Hocking (born 1975, Detroit, Michigan)
Installation artist, sculptor, photographer and 2011 Kresge Fellow Scott Hocking uses urban exploration to create site-specific installations with found objects from areas throughout Detroit. While foraging for relics in neighborhoods and scouting locations at industrial complexes, Hocking photographed old factories and neighborhoods. Interested in the cyclical nature of civilization and history, Hocking has noted: “Wherever I go, the history and people of the place influence my artwork. I explore my surroundings for things forgotten or kept out of sight, gather information, images and materials.”

Ari Marcopoulos (born 1957, Amsterdam, Netherlands)
Ari Marcopoulos has produced a large body of work on youth culture, its social rituals and its underground activity that emerges from music, snowboarding, skateboarding and street art. While visiting friends in Detroit, Marcopoulos met Hunter and Shane Muldoon, two young musicians whom he photographed in their southwest Detroit home. During the session, Marcopoulos made a series of still photographs and the book Detroit 2009, as well as a seven-and-a-half-minute video of the brothers experimenting with audio equipment and resulting sound effects.

Andrew Moore (born 1957, Old Greenwich, Connecticut)
Andrew Moore’s photographs depict cultures in transition and decline. In 2008 and 2009, he took pictures in neighborhoods and abandoned buildings throughout Detroit using large-format color photography to create an in-depth study that became part of the book and exhibition Detroit Disassembled. Moore’s Detroit series has won critical acclaim and international attention. He states: “My photographic interests have always lain at the busy intersections of history, particularly those locations where multiple tangents of time overlap and tangle. In other places I have photographed, such as Cuba and Russia, these meanderings of time create a densely layered, historical narrative. In Detroit, the forward motion of time appears to have been thrown spectacularly into the reverse.”

Alec Soth (born 1969, Minneapolis, Minnesota)
While traveling across the U.S. for a story about the decline of the American empire for Britain’s Telegraph Magazine, Alec Soth photographed a vast cross section of life in small towns, Western horizons and Midwestern cities like Detroit, which had become notorious for its urban decay. The work became part of a series and book called The Last Days of W., made as a reflection on the state of the country in the final days of George W. Bush’s presidency. Soth said his work is neither a political statement nor a critique of American life, but that his photographs from The Last Days of W. represent “a panoramic look at a country exhausted by its catastrophic leadership.”

Corine Vermeulen (born 1977, Gouda, Netherlands)
Dutch-born photographer and 2009 Kresge Fellow Corine Vermeulen has lived and photographed in Detroit for the past 10 years. Her work gives visibility to the people and places that characterize and define new urban lifestyles and comments on the challenges of those living in Detroit’s post-industrial age. Through portraits, panoramic views, and studies of urban subjects such as hand-painted signs and murals, Vermeulen reveals the multifaceted nature of the city and its history. She believes that Detroit represents “a unique and great vehicle for change, where old structures are no longer in place and the possibilities for something different to happen are endless.” 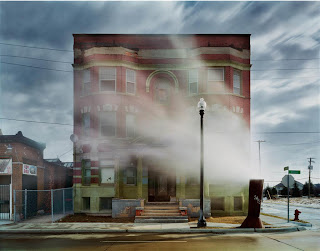 © Courtesy of the artist and the Yancey Richardson Gallery. Detroit Institute of Arts. 2010.34