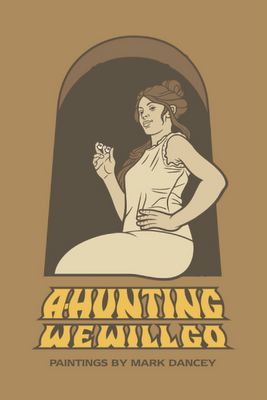 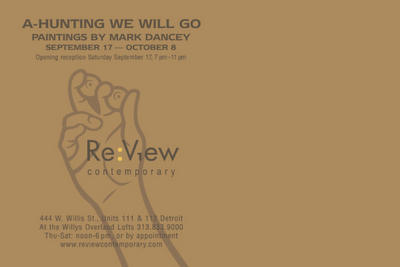 Carson McCullers wrote that the heart is a lonely hunter. According to artist Mark Dancey, If she was right, then the eyes are surely its hounds, because they constantly seek and pursue the heart’s quarry. Dancey's new solo exhibit at Re:View is inspired by this idea, by the writing of Gabriel García Márquez, and by legends of love at first sight.

Dancey's latest series of round oil paintings—executed in forced perspective, in a limited palette that recalls sepia photographs of the 19th century—offer various hunter’s eye views of fetching huntresses who catch our eyes from atop the ruins of the Spanish colonial world. Taking its title from a song that originally appeared in “The Beggar’s Opera,” a lusty tale of highwaymen and whores, “A-Hunting We Will Go” invites viewers to join Dancey in his visual reflections on the transience of beauty, the consolations of nostalgia, and the role that the eyes play in all our solitary hunting.

Mark Dancey’s recent circular paintings developed from his interest in the full symbolic and physical strength of the circle and the enduring appeal of the nude in scenes that combine personal narratives with traditional myths.

Choosing to paint in oil, as it is a timeless medium, and painting the human figure, as it is a timeless subject, Dancey has studied the great ceiling painters of the past and adopted their strategies for rendering the body in forced perspective. He points out that “humans have always looked up when contemplating what is beyond us, and when we see figures from a low vantage point, ringed by perfect circles, they naturally appear in a mythic light and seem capable of things we on the ground can only dream about.”

Dancey considers the circle the perfect shape and the perfect symbol, because “the apertures through which we view the world are round and because everything we see is therefore seen in a circle, there is a powerful logic in circular pictures. In its eternal return to its starting point the circle is indeed perfect, and has long symbolized the cycles of nature.”

Painter and illustrator Mark Dancey lives in Southwest Detroit. Dancey was a publisher and major contributor to Motorbooty Magazine in the late 1980s and throughout the 1990s. Dancey’s work has appeared in many consumer magazines, on CD covers for rock bands, and in galleries across the country.