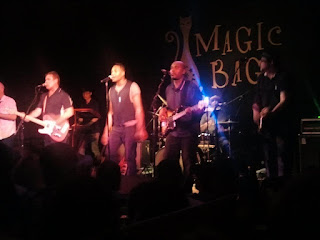 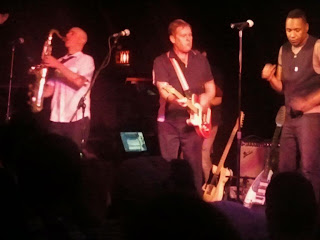 On Monday 9/26/2011, The Magic Bag in Ferndale was bursting with almost a packed house full of Ska dancers who came with their dancing shoes on to hear the music of THE ENGLISH BEAT!!!

If you were one of those 40 something to 60 something year old present at the venue trying to re-live those MAGIC moments from the 80's then, you witnessed a GREAT evening of music! There were a few younger fans BUT, mostly older middle age men and a lot of beautiful women yearning for that song that made them jump, bop, dance and most of all – remembering their dancing days. Everyone came to just "enjoy some great tunes from a GREAT band"!

All their songs were very good especially those that had some outstanding saxophone solos from Jeremy that blew the crowd away and one song that ended with a long sax solo screeching into oblivion. The guitarist interjected with some fine "chops" of his own that made the crowd semi-receptive to the band during the set. Overall, the set of tunes were done VERY NICE even though the dancing floor was empty. Maybe next time, they can play a bit longer for the mostly "English Beat" fans in attendance to get them in the groove prior to the main band hitting the stage.

Once The English beat hit the stage at 9:45, the dance floor and the lower floor in front of the stage were packed with dancers who had fled their seats, rubbing elbows with each other yearning to dance their hearts out.

The English Beat known in North America (or in England as The Beat) is a ska revival band founded in Birmingham, England in 1978. They fuse ska, pop, soul, reggae and punk rock into their songs. Much of their lyrics deal with themes of love, unity and sociopolitical topics.

They started with "Rough Rider" which had the crowd dancing, clapping, yelling and everything short of mayhem before they continued into the re-make of Smokey Robinson & the Miracles – "Tears of a Clown". Dave dedicated it to Detroit's Motown Museum. They continued with others that included "Twist & Crawl", "I'll Take You There" and "Confess" which had a nice pop feel to it. Throughout most of the songs, there were a lot of nice vocal harmonies, exceptional sax playing, great drumming and most of all – GREAT between songs batter from both Dave and Antonee. They kept thanking the large lively crowd about coming out on a "MONDAY" (especially a rainy day like England's weather) to dance and have a GREAT time.

Dave announced the next song "Two Bleeding Sorts" as throwing bricks at Nazis. That was followed by "Can't Get Used to Losing You" originally done by Andy Williams, "Click Click" that was influenced by the punk movement and "Save it for Later". Then continued with "Best Friend", "Wine and Grind" that had the crowd jumping to higher heights.

Antonee did a little song a cappella style before Dave and the band continued to impress the crowd with their stamina for a few more songs. The English Beat just kept the crowd dancing into frenzy for the whole TWO HOUR, 20 song set. It was just an enjoyable night that made everyone feel like it was "1980" again and could dance for hours.

DO NOT MISS your opportunity to see them next time they come to town because if you love to dance and yearn for that sound of your youth – THE ENGLISH BEAT should NOT be missed.