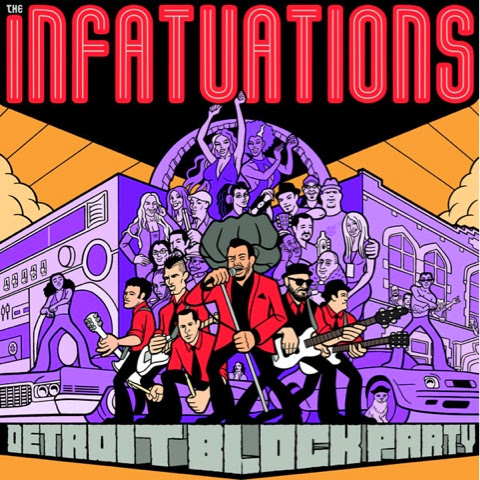 Summer. Party. Record.  That's really all you need to know about The Infatuations new album Detroit Block Party (Acid Groove Records).  With a familiar Detroit flavor thrown in as an added bonus, the band has a familiar sound that references Motown, The MC5 and P-Funk all in the same song. And the new full-length showcases the fun, versatile style in grand fashion.

In case you've been hiding under a rock, you might not know that Mayor Duggan might as well declare 2014 as the summer of The Infatuations.  Since the record release show with Ty Stone back in May, The Infatuations have been everywhere.  Festivals, block parties, even Tigers games at the CoPa. This summer has been one big coming out party for the band, and this record has been the soundtrack.

At its core, The Infatuation are the brainchild of founding members Marco Lowe and Christian Draheim, and Detroit Block Party is the culmination of that dream.  The duo make up the songwriting/production team Dra/Lo, and along with drummer Robert Myers their unique, funky flavor is all over this record.  But the band as a whole is what brings the music to life, both on tape and live.  The Infatuations have a retro-soul vibe in the same vein as Vintage Trouble or Fitz and the Tantrums, but with a distinct Detroit rock edge. You can dance to and just as easily play air guitar to any song on the record.

"Tonight We Celebrate" kicks off the record as a perfect radio-ready dance party anthem.  With a slinky-funky disco groove, and an infectious refrain, it's nearly impossible to resist singing  "Don't stop the mu-sic!"  As with "Dancin on My Knees" and "Diamond Disco", the band sometimes rides the line of cliched disco, but pulls it back in with Draheim and Behnan's edgy rock guitar work.  Add to the mix the storng, soulful voice of Caleb Gutierrez and The Infatuations are a four star restaurant.  Gutierrez really carries the record and keeps listeners engaged as he easily shifts dynamics between sweet and soft  on "Yesterday Morning" and sharp and assertive on "Box of Shells."  And even though the band switches up the vibe here and there, it has a cohesive feel that makes you want to listen to the whole record without having to skip around.

All in all, Detroit Block Party is exactly what it says it is. A funky, rockin' dance record with a little something for everyone. Make sure you grab a copy and catch the band at one of the many live appearances this summer.

But, you don't have to take my word for it. Take a listen right here and give it a spin.