In Art News: Preeminent Fashion Photographer Bruce Weber is showing his work at the Detroit Institute of Arts Article and photos: Sandy Hopkins


In Art News: Preeminent  Fashion Photographer Bruce Weber is showing his work at the Detroit Institute of Arts 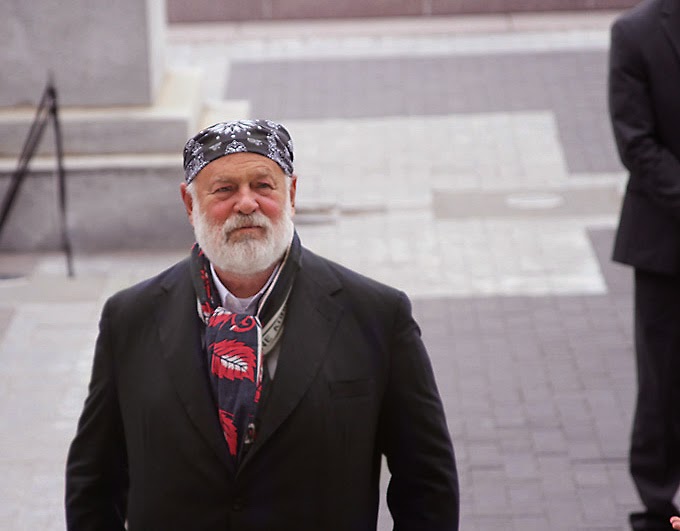 The Bruce Weber exhibit was brought here in hopes of raising money and awareness to help save our museum. We have some of the most recognizable pieces of art in the World and cannot afford out of pocket or heart to lose them. This show is a call to action that can not be missed. Needless to say I jumped at the chance to cover it on any level that I could for MOTORCITYBLOG.

The Opening Exhibit had decadent and cram packed agenda included a morning Press Conference, A 100 woman of the Arts Luncheon, and a VIP evening cocktail event with a live performance from our very own woman of rock Patti Smith.

The works of Bruce Weber 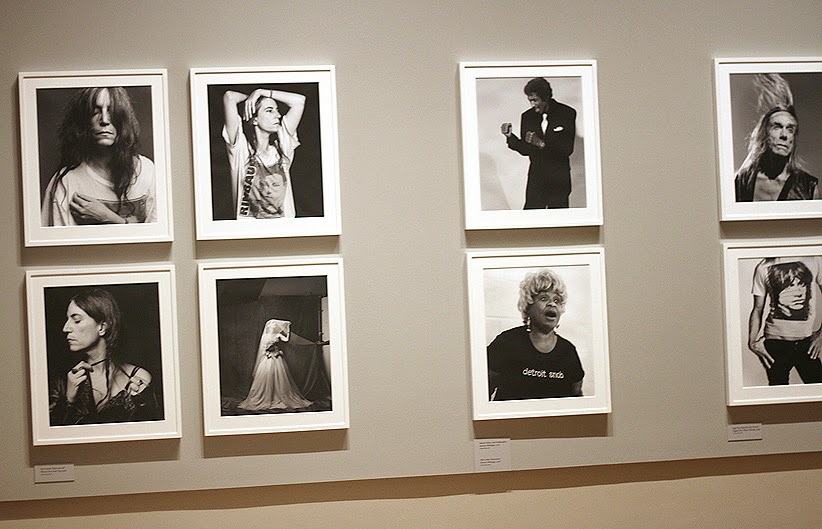 Why is Bruce Weber in Detroit?

In 2006 the award-winning photographer was here on a shoot with super model Kate Moss for W magazine. He fell in so love with the humble city, spending his free time meeting and photographing many heart strong locals. He loved it so much he even came back a second time to reconnect with his new friends. After hearing about the bankruptcy issues pummeling our city and the possible effects of it on our museum, he had a sit down with Anna Wintour, the Editor and Chief, of Vogue magazine and the inspiration for the Merly Streep character in The Devil Wears Prada. He told her he wanted to help. She had a meeting with the executives at the world famous Conde’ Nast, the most famous publication company in the world.  Founded in New York City in 1909 they are responsible for publishing Vogue, Glamour, Vanity Fair, The New Yorker, Bon Appétit, Style, Self, and Golf Digest just to name a few. Together they dove in feet first to help in any way they could. They decided to have a fundraiser inviting their friends and partners from around the world. They would unveil his Detroit Project in Detroit. Bruce asked one of his favorite Detroit subjects and friends Patti Smith to play the event and she wholeheartedly agreed.  Bruce Weber was quoted as saying it made him happy to be able to invite his Detroit subjects to come see themselves on the walls of the DIA.

What a great guy that Bruce Weber.

I was lucky enough to get a photo documentation of the opening reception for MOTORCITYBLOG! 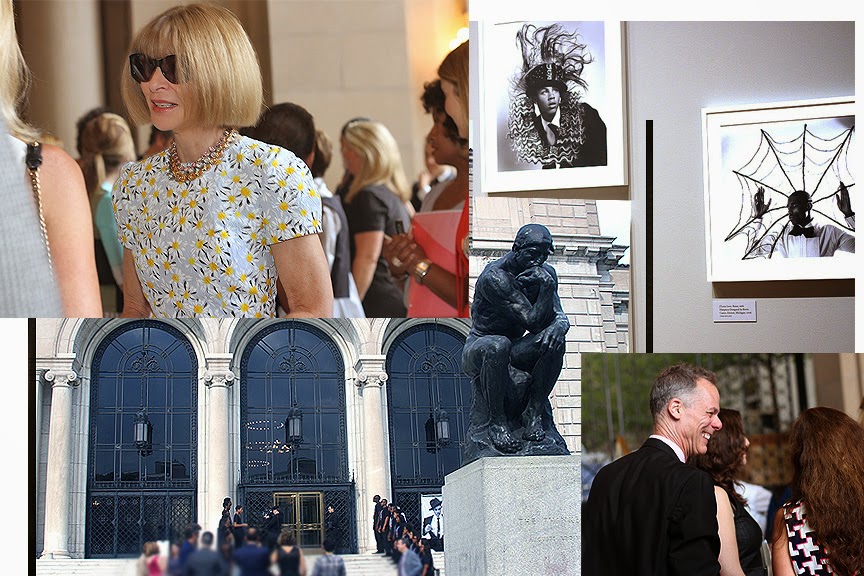 The scene was mesmerizing at the DIA, the words hustle and a bustle, both understatements in description.  An energy of hope and triumph was in the air filling the museum’s walls with an intensity I had never quite witnessed. Photographers from all over the globe were rushing to get shots of visiting celebrities. I felt a bit overwhelmed as I was jostled around, trying to get some shots in myself.  It was hard to comprehend that I was completely surrounded by people who worked for the biggest magazines in the world. A dream and a nightmare all wrapped in one. I was proud to be there and wanted to do the best I could to represent our city, I could see the same look on everyone’s faces. We were all so very excited. I was so excited in fact, that after a few shots, I realized I still hadn’t picked up my Press Pass. The museum was set up like a maze and I got rerouted for a moment, while trying to work my way back to the press area I suddenly stumbled into Bruce Weber who was getting a private shoot for a news story. I gasped, smiled, then took a few steps back before scurrying away between catering carts. The experience was incredible and overwhelming. Exhilarated I knew I had to come back for more. 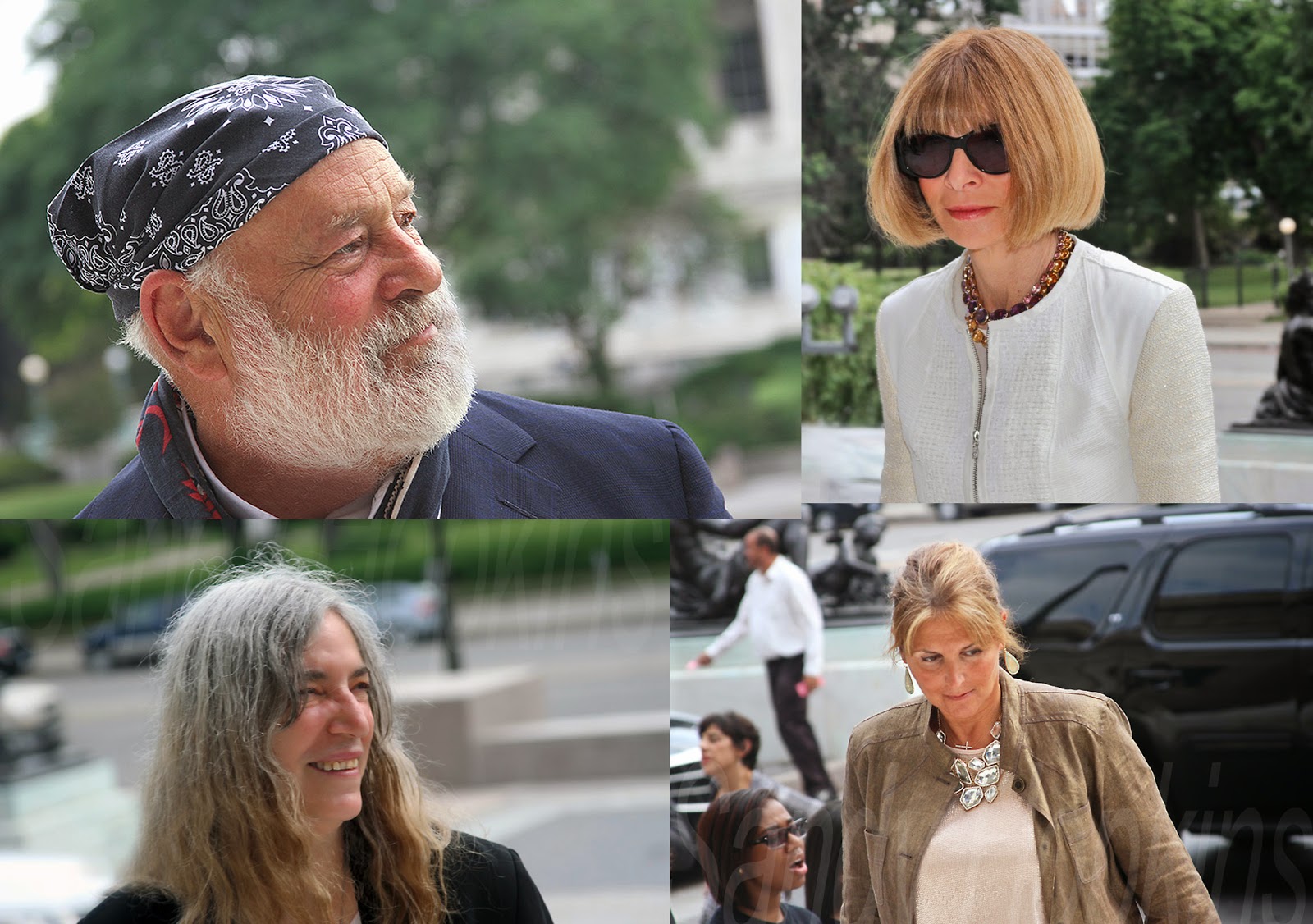 Later that evening I stood in front of the entrance anxiously awaiting the arrivals. At this point the press had thinned considerably, and there was one photographer from CBS Detroit covering the story with me. We were both excited to capture the images of the famed Patti Smith and Anna Wintour.  This Gala welcoming was a force. The red carpet was replaced by the awe inspiring Detroit Mosaic Choir.  Party goes were being welcomed to the museum doors by twenty-five of Detroit’s best young vocalists. They lined both sides of the entrance singing Motown melodies in harmonious deliciousness. One by one the guests arrived wide-eyed with curiosity and unabashed amazement.

Watching the scene unfold was like watching a cartoon where there is a pie on the windowsill smelling really good, the smell vapors turn into fingers, grabs the tempted by the nostrils, and pulls them in. I perched at the top of the stairs taking it all in myself. After a while I finally realized the grand scale of this event.  Local and International celebrities from around the globe were here in our city to support our museum, and they were having the times of their lives

My favorite part was the celebrity of it all, never In a million years would I have thought that I would have laid my eyes on the dazzling Anna Wintour, her strength emanating, in an untouchable shield of chic. Her entourage consisted of Bruce Weber, Grace Coddington, a plethora of super models, diplomats, filmmakers and Patti Smith. 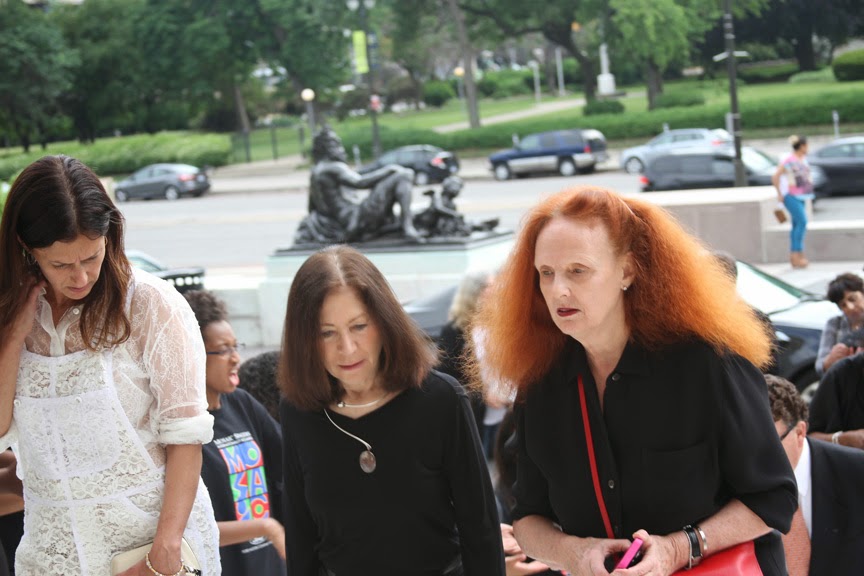 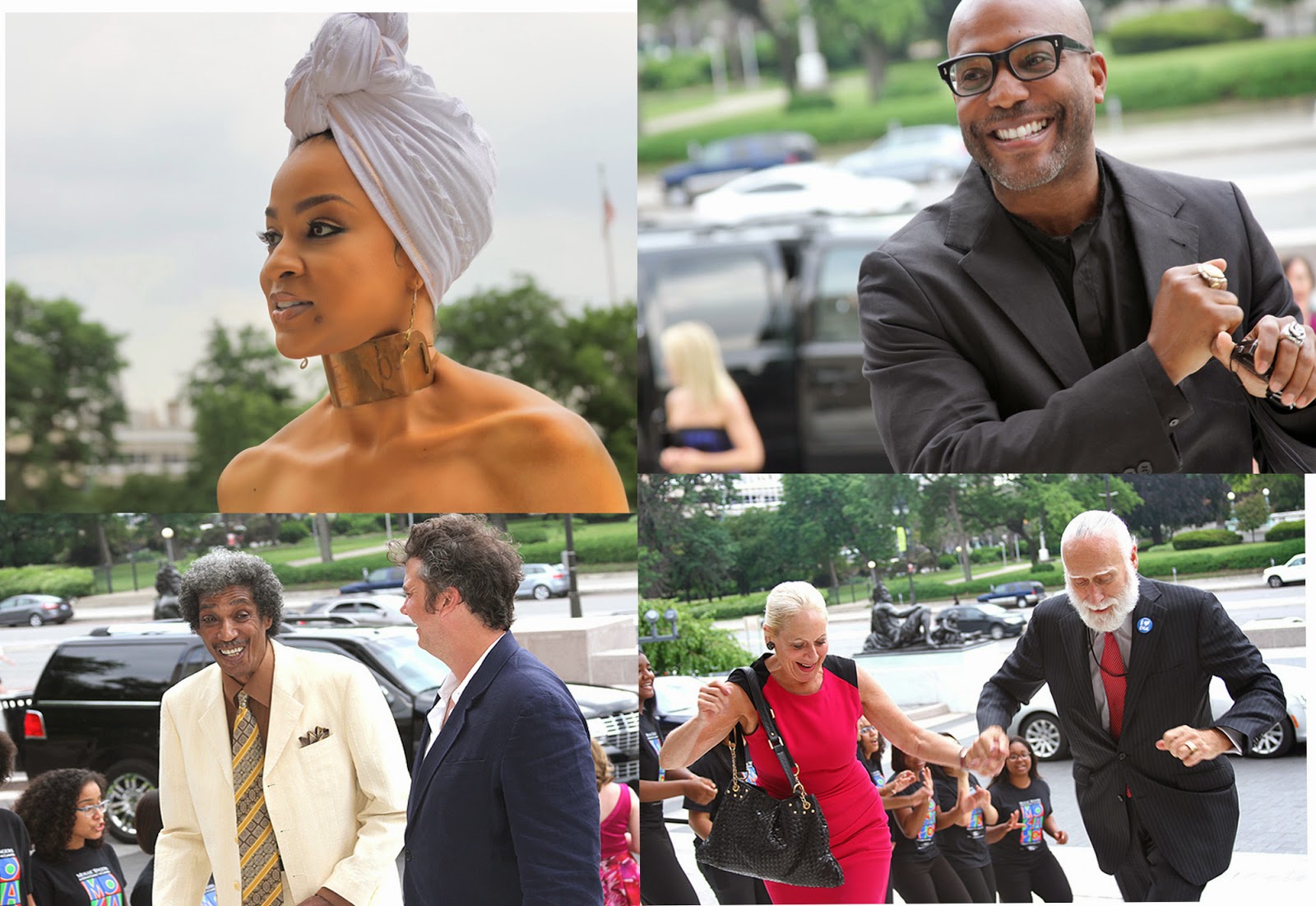 Seeing such a tantalizing mix of people coming together with Detroiters was pure joy, and it could not have happened at a better time.  As we know the art collection within the walls of the DIA has been in eminent danger of being parceled out due to years of lackadaisical behavior of some of our government officials. We have all been on the edge of our seats waiting to see what will unfold and watched as activists from all parts of the city jumped to their feet in action calling attention to what was going on, stopping the situation before it went spinning out of control.  It has worked because the world is watching. The recent visitors prove this and are a sign of hope. We all have one goal, to save Detroit’s most glorious gem, The Detroit Institute of Arts. The DIA was created to make us shine. Since it’s first painting donated in1883 it has been a priceless gift to us and now its collection consists of over 65,000 works.

We own a juicy bit of global historic genius. It is apparent that our City and Museum are finally being appreciated for their unique character and strength. May they always stand in peace for all to enjoy.

The Bruce Weber exhibit extends through September. If you have not yet been to our museum, or haven’t been in a while. I suggest you go see what all the fuss is about. It is a decision you will be happy that you made.  Go get your art on! 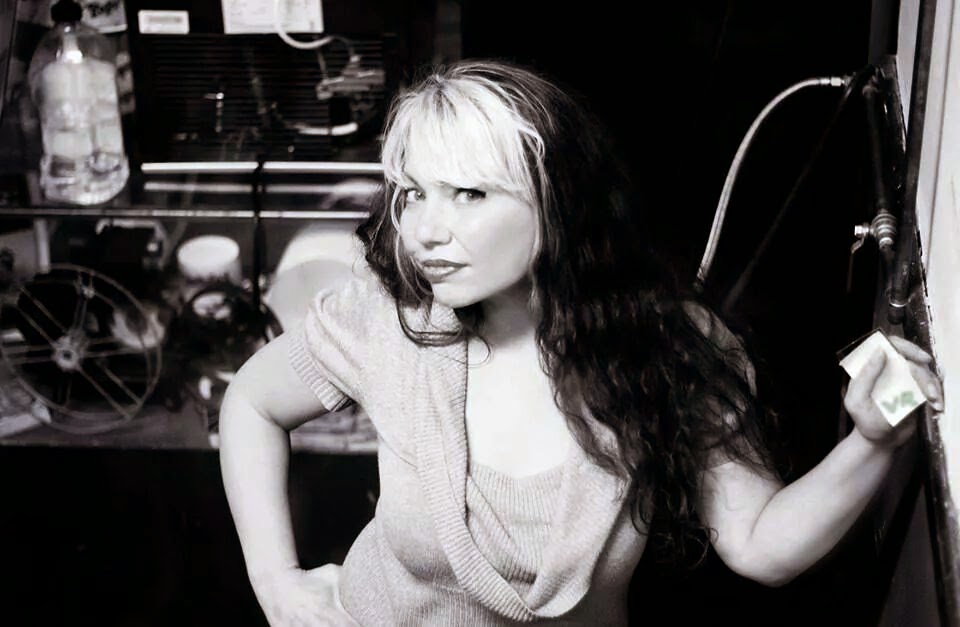 Article and photos by
MCB's Sandy C. Hopkins
Posted up by DIETROIT on 7.7.14