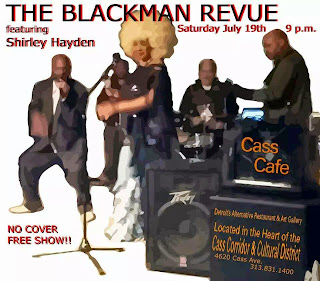 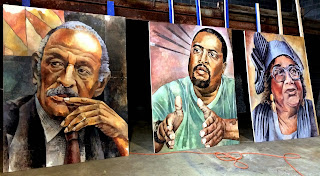 Nicole Macdonald's The Detroit Portrait Series: Writing Our Own History (Through Art) is a public outdoor art project that records Detroit history from the "ground up. "The figures depicted in the series honor both social and political leaders, as well as everyday heroes from the city's past and present through large-scale portraiture. Cass Cafe will preview select Portraits from the series in the gallery from July 19 - Sept 13, 2014. In late 2014 the panels will be installed in the 16 windows of an abandoned warehouse at Grand River and I-94. Additional building sites for this ongoing series installation will be chosen based on viewer accessibility, the need for historic preservation, and blight removal. The Detroit Portrait Series is inspired by historian Howard Zinn's book, A People's History of the United States, and is sponsored in part by the Chalfonte Foundation.

An opening reception for exhibition with the artist will take place Saturday July 19, 7 – 10 pm.

Later the same night Cass Cafe honors Detroit music icons with The Blackman Revue featuring Shirley Hayden in a night of P-Funk inspired jams. The Blackman and his crew pull out the old school and give it a new twist, and featuring Parliament Funkadelic family legend Shirley Hayden.

The Blackman Revue featuring Shirley Hayden starts at 10 p.m. and goes until 1 a.m.

Cass Cafe is located at 4620 Cass Ave. in Detroit's Midtown, and is open seven days a week.

For more information about The Detroit Portrait Series check out this Metro Times article: