MCB PICK OF THE WEEK as well as FREE VINYL FRIDAYS (on wednesday): Abdu Ali LIVE at The Trumbullplex Detroit - 7/9/14

thats right - this slimline 45 from Abdu Ali is up for grabs and we could only pry a single solitary platter from his hands for this giveaway as they are mega short runs so hop on down to Trumbullplex tonight and pick up a hot off the press copy for yourself because you aint gonna win this shit unless you are on the quick rick
email motorcityblog@earthlink.net for your slim to no chance to win
and get to this show! 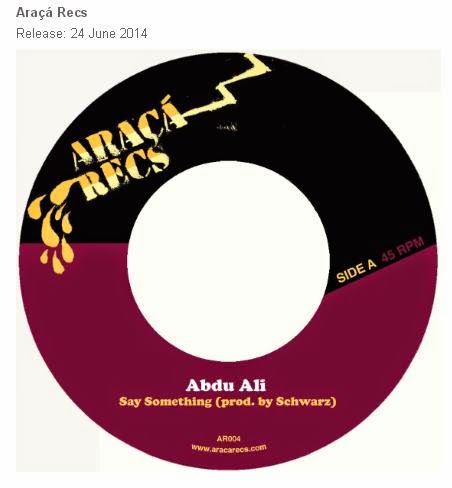 Propelling out of Baltimore, Abdu Ali is a musical force who raps, sings, and screams over unorthodox beats for the creation of inspirational melodic poetry. Ali blends elements of club, punk, soul, noise, hip-hop, and ballroom into a beautiful fabric interwoven with crazed vocals complete with the twists and turns of his poetic designs following their slope. On stage, he fuses the punk aggression of Keith Morris with the soul of Nina Simone, alternating between launching himself into the crowd or gently touching each audience member bringing them closer into the experience. Energetic, blunt, and tangible… Ali's live performances are a must-see.
Abdu Ali has released two critically-acclaimed mixtapes (INVICTOS,2012 and Push + Slay, 2013) and is featured on Cities Aviv's Come to Life LP (2014.) Infinity Epiphanies is his first vinyl release and includes production from left-field Baltimore club producer, Schwarz, and Houston noise giant, B L A C K I E... In All Caps, With Spaces.
Abdu Ali plays steadily on the east coast, has toured the Pacific Northwest, and was featured at Baltimore's ScapeScape Festival and the SXSW's GayBiGayGay showcase 2013. He has shared the stage with Rye Rye, Big Freedia, B L A C K I E, Cities Aviv, Le1f, DJ Uniiqu3, TT the Artist,  Schwarz, Picture Plane, Butch Dawson,Black Sheep Dz, Hemlock Ernst (Sam Herring from Future Islands,)Cakes Da Killa, Jungle Pussy, Vjuan Allure, and Rizzla. Ali (in conjunction with True Laurels 'zine) curates the bi-monthly live party,Kahlon which has brought some of the region's finest performers to Baltimore. Kahlon was recently featured on Vice/Noisey's Kid Mero show!
Ali will tour the US with Chiffon in June/July 2014 as well as play select festival dates including Idapalooza (Tennessee) in late May andStargayzer Fest (Austin) in early September.
Plans are in the works for Abdu Ali to tour Europe in Fall 2014 or early 2015.
www.abduali.com