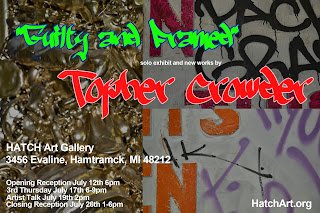 Please join us in celebrating the new solo works of artist Topher Crowder, "Guilty and Framed" will be on display at HATCH Art Gallery July 12th - 26th.
The opening reception begins at 6pm Saturday, July 12th located at 346 Evaline St, Hamtramck, MI.
We also have a gallery talk July 19th at 2pm.
More information and gallery hours can be found at www.HatchArt.org

"The informal definition of the word FRAMED states it is the production of false evidence to manufacture an allusion of guilt.

As a verb, FRAMED can also be used to describe the process of creation or formulation of a concept, plan or system.

The Hatch Gallery has graciously allowed me to present "Guilty and Framed", a collection of recent photography, oil paintings and public vandalism made private that explores the idea of how art is affected by what lies beyond the four corners of the 'canvas'. How does framing a work alter its depth or meaning? Does the frame become part of the performance? When illegal public works are cut from cinder block walls for their 'protection' and made private, is the original concept destroyed or has it evolved into something entirely different?

I have always loved the concept of storytelling through images and have found inspiration in the animated Saturday morning cartoons from my childhood, vintage postcards, comic books of the 1960s and 1970s, and roadside billboards. I have fond memories from my childhood spent in the early 1970s, of giant illuminated beer-bottle billboards serving up electric brews, smelling the pungent odor of grease paint and alcohol while being entertained by hobo clowns in the front row at a Shriner's Circus, Saturday mornings spent with H.R. Pufnstuf, and the televised pictures of the Vietnam War. My method, inspired by a Saturday-morning cartoon edited for commercials, a postcard received from a foreign location, a comic book with more than a few pages torn out, or a partial, high-speed glimpse at a roadside billboard, reveals these childhood memories and everyday emotions." – Topher Crowder