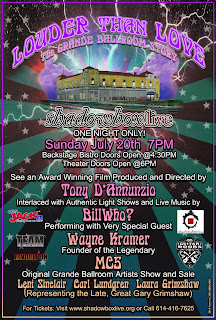 While the rest of the country was grooving to the sounds of the "Summer of Love" in 1967, Detroit was the epicenter of a more gritty and raw sound that came to define rock music. On Sunday, July 20th, Shadowbox Live presents the film Louder Than Love – The Grande Ballroom Story, winner of "Best Documentary Award" by the prestigious Las Vegas International Film Festival.

Louder Than Love is the greatest untold story in Rock N' Roll history as revealed by the musicians, artists, and people that lived it.
Some of the all-time greats including The Who, Janice Joplin, Sly and the Family Stone, Led Zeppelin, The Kinks, Elton John, Bob Seger, Joe Cocker, CCR, Van Morrison, Jethro Tull, Ted Nugent, Jefferson Airplane, The Moody Blues, Deep Purple, Steve Miller, Jeff Beck, Mitch Ryder, Bo Diddley, Fleetwood Mac, Rod Stewart, BB King, Pink Floyd, Traffic, BST, Cream, The Grateful Dead and many, many, others graced the stage of the Grande Ballroom. The MC5, who many credit as the original punk rock band, was the house band at the Grande.

Shadowbox Live will create a true Grande Ballroom experience by interlacing the film with live music and the light shows made famous by the venue. Joining the stage with Shadowbox Live's house band BillWho? will be special guest, founder and lead guitarist of the MC5, Wayne Kramer. The Grande was equally well known for its psychedelic posters and handbills used to promote the shows. Original Grande Ballroom poster artist Carl Lundgren and Grande photographer Leni Sinclair will be in attendance. Laura Grimshaw, wife of the late poster artist Gary Grimshaw, will also be present at the event. Before and after the show, there will be a gallery and sale showcasing authentic art and photography from these artists in Shadowbox Live's Backstage Bistro. Louder Than Love producer and director, Tony D'Annunzio, will also be on hand to introduce the film. A portion of the proceeds from the show will go to Wayne Kramer's foundation, Jail Guitar Doors USA, an outreach that brings musical instruments and education programs to prisons across America.