Ed Hamell Really is the Happiest Man in the World 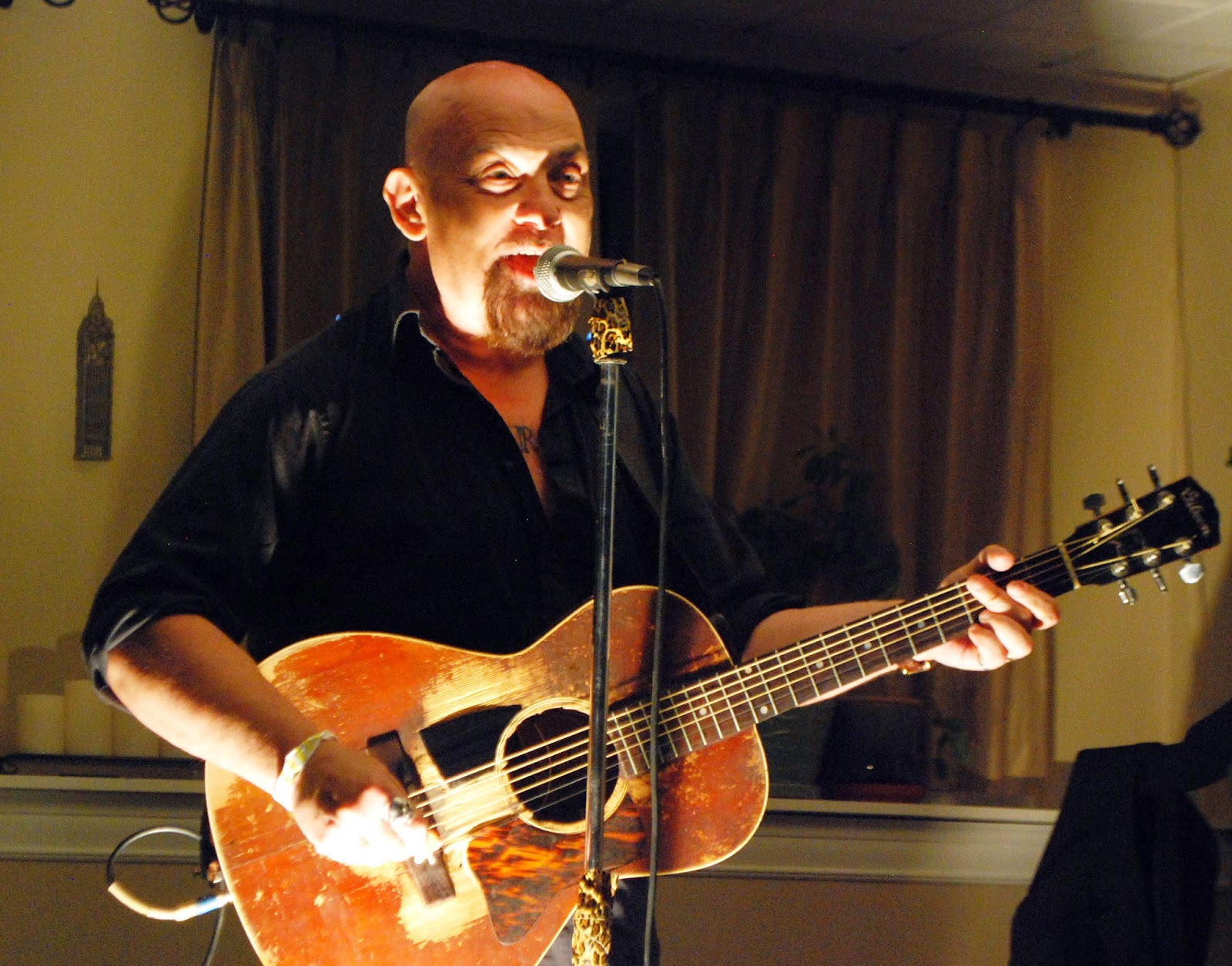 I had my MasterCard “priceless” moment last Friday night. A six pack of beer, Bud light Lime, $6.99. Donation to a house party,  $10. The opportunity to hear Hamell on Trial in a basement with friends, priceless.
I’ve known about Ed Hamell of Hamell on Trial for about 15 years (maybe even longer),  going back to when I received his first press release from Mercury records with his single that introduced me to a singer that really was like his song “Big as Life.”   I loved the hell out of that song as Ed tells a story of misguided racism by the media that still brings a tear to my eye.
The years that followed I’d see Ed’s name pop up every now and then, usually in a UK music magazine that would heap loads of praise on him for being one of America’s great storytellers and songwriters. He released albums that were full of crime and wit. Shady and colorful characters he met appeared on the albums like a psychedelic version of Mr. Rogers Neighborhood. However, I didn’t get Ed’s real magic and charm until I experienced him live about 8 years ago. He played a small club on the very east side of town in front of a crowd of about 20 people. He joked between songs and played a beat up guitar like a madman that had made a deal with the devil. I interviewed him that night in his car while rain splashed on the windshield and he told me stories about music and touring.
I’d almost recently forgotten about Hamell on Trial. I tucked him into a corner of my brain where smart, talented people that don’t fit in go while the rest of my mind space is full of hollow, entertainment candy that never satisfies. But I was fortunate enough last week to find myself invited to house party that Ed was playing. That’s part of Ed’s life now, playing intimate parties around America that afford him enough to travel to the next stop and maybe take in some fun for him and his son, Detroit (coolest name for a kid ever). I spoke to Ed  before he played and he told me about his travels the last few years, including a recent trip to London. Those people over the pond still get what makes Hamell on Trial great. 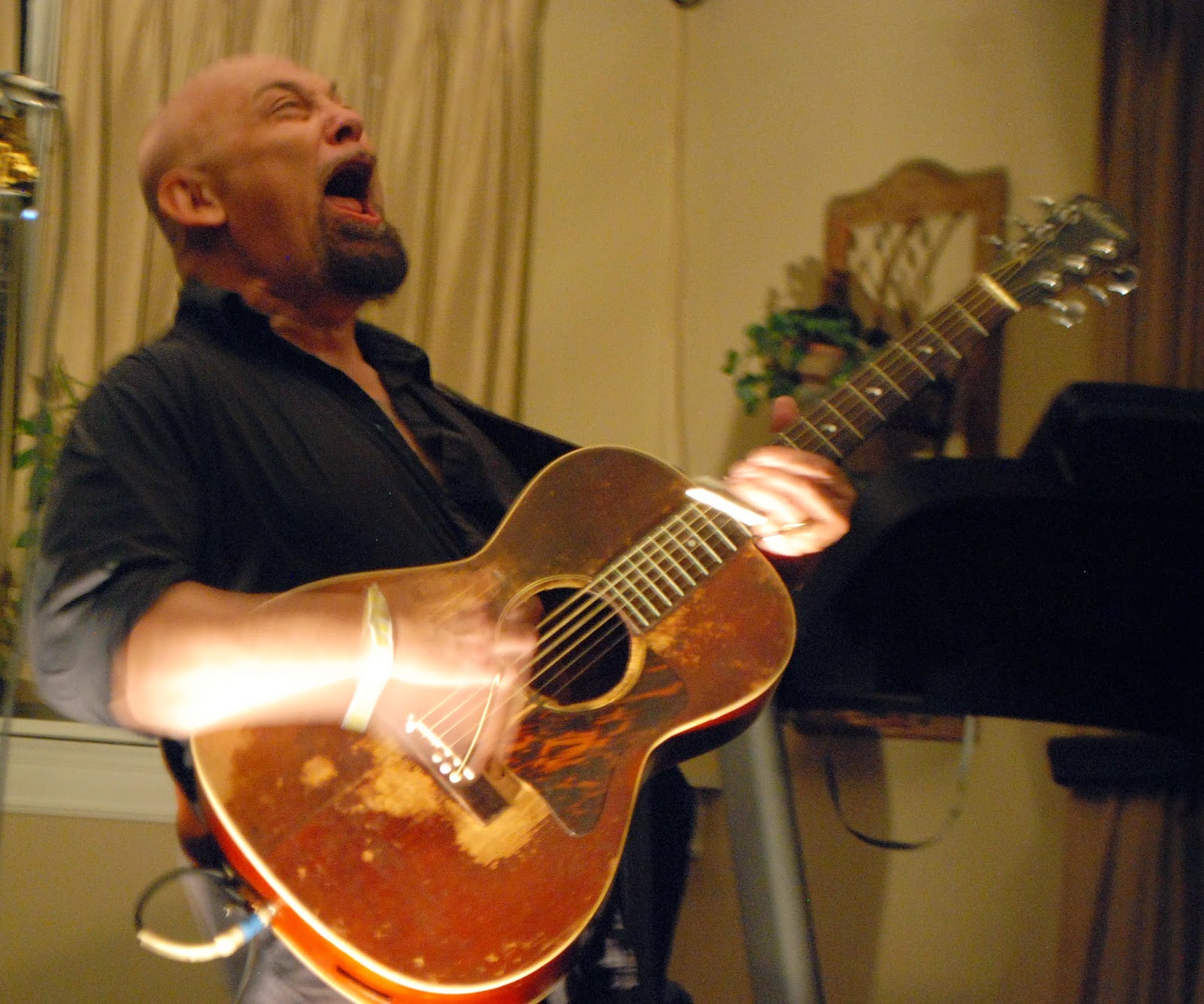 The night kicked off with Ed introducing my friend’s daughter with her ukulele.  It was her first real audience so she was full of fright but took a bold approach and sang some songs that made us all beam and tear up. I could look over shoulder and see that Ed was sharing in this special moment. Around midnight, Ed strapped on his rugged guitar, the same one I saw him with years ago, opened with a few jokes and then tore into his set. He started the show with some songs from his new album “The Happiest Man in the World” and made us laugh by telling us about hard and bad times that still fill him with joy. His guitar playing was ferocious. There were times I thought I saw smoke coming off the strings. It didn’t take long before everyone in the room, even the young  and jaded, were transfixed by Ed, realizing they were in the presence of an authentic entertainer. He took requests and I had him play “Big as Life”. We laughed hard during “When You Are Young” and sang with him on several others. He ended the night imploring us to shout an expletive that I enjoyed yelling along with my daughters. Then, we all, everyone in the room, surrounded his table of CDs and albums to buy a couple and put in a few dollars to get his son a new Xbox.
That night has made me think again about what it takes to make a great show. It’s not fancy lights, a packed house or even a good PA. It’s songs with melodies that speak to the heart and mind from a gifted artist that has lived a life true to his art.