INTERVIEW: “The craft beer industry is the embodiment of the American dream” - Jason Osburn of MICraftBeerCulture Magazine - LAUNCH PARTY / FUNDRAISER ROUND 2 at NEW WAY BAR IN FERNDALE, MI SATURDAY JULY 12th with THE WEBBS, ELEANORA and CAPTAIN IVORY - by Jeff Howitt for MCB 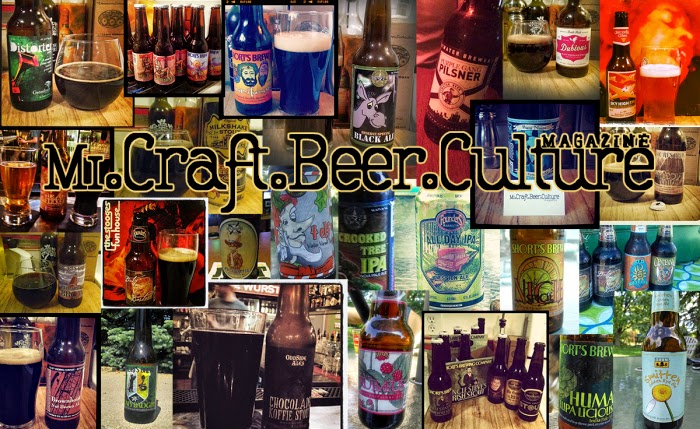 MCB:    What was the inspiration behind starting a magazine that covered the craft/artisan class of Beer Brewers in Michigan?
Jason: The inspiration came from the beer itself. I was actually drinking a Dark Horse Crooked Tree at the time. I played a song on the jukebox. You know the old Merle Haggard song, ‘I think I’ll just stay here and drink’?  The line, “Hey, puttin' you down don't square no deal. Least you know the way I feel. Take all the money in the bank. I think I'll just stay here and drink.”? Well there was a point of frustration where I got tired of complaining and decided to do something of my own. I have always been an artist and been involved in the nightlife, music, art and food industries and there is a work ethic and pride in the industry that seems to be rare these days. I combined that with a lack of reading material that supported the industry and catered to the actual people involved. MiCraftBeerCulture is not a ‘brewing’ magazine nor a coffee table book and not just a vehicle for advertising the places that those of us who make a living off the industry can’t afford to eat at or drink at. I wanted to create something for us. Something you would be interested in reading while you sit at the local watering hole and wait for your friends to arrive. I am a graphic designer by trade with experience in the publishing industry. Combined with my love for craft beer, food, outdoor recreation, my ‘green thumb’ and interest in all things Michigan as well as being a father to beautiful young daughters who finds no greater happiness than watching them experience and learn from the very same surroundings I experienced as a child in Michigan made this a no-brainer.

MCB:    You've worked in the National Entertainment scene. What brought you around to focusing on Craft Beers and do you find similar artistry in Brewers?
JASON: The craft beer industry is the embodiment of the American dream. Not the fantasy book of ‘happily ever after I’ll sip martinis by my pool all day and hope TMZ covers me just enough to keep my rating up’ dream, but the ‘I’m done with this 9 to 5 crap working to fill someone else’s coffers’ dream. It’s the, ‘time to have a go at doing do what I love’ dream. It’s no different than every artist, writer, BBQ hobbyist, craftsman and musician, wants for themselves, to pursue their art or craft (no difference in my book except on a utilitarian level) and be able to support themselves, their family and their lifestyle doing it. I also love the community of the industry. Brewers are brothers and sisters. They work together, they wish each other well and they support each other. I love that comradery.
The National entertainment scene has become so controlled by corporations who own everything from the radio stations to the venues to the billboards to the artists themselves. It is not an open enterprise where hard work and talent will succeed. It is a commodity that is bought and sold. I am going to use a rather extensive Dave Grohl quote here: “When I think about kids watching a TV show like American Idol or The Voice, then they think, ‘Oh, OK, that’s how you become a musician, you stand in line for eight fucking hours with 800 people at a convention center and… then you sing your heart out for someone and then they tell you it’s not fuckin’ good enough.’ Can you imagine?” he implores. “It’s destroying the next generation of musicians! Musicians should go to a yard sale and buy and old fucking drum set and get in their garage and just suck. And get their friends to come in and they’ll suck, too. And then they’ll fucking start playing and they’ll have the best time they’ve ever had in their lives and then all of a sudden they’ll become Nirvana. Because that’s exactly what happened with Nirvana. Just a bunch of guys that had some shitty old instruments and they got together and started playing some noisy-ass shit, and they became the biggest band in the world. That can happen again! You don’t need a fucking computer or the internet or The Voice or American Idol.”
It’s the exact same way with the craft beer industry. You start making beer in your garage and it sucks and you stick with it and eventually you figure out a few chords and melodies and a friend or two says it’s good and you keep working and working until you feel you are ready to get out there and present your art to the public.

MCB:    What do you think is unique about Michigan Craft Beer?
Jason: One of the unique aspects of Michigan Craft Beer is that we have the resources, climate and potential infrastructure that every beer made, canned or bottled in Michigan could be made entirely from ingredient and products grown or produced in our state. The hops industry is poised to explode and replace a large portion of the stone fruit crop in our state as climate changes and late frosts are causing hardships for stone fruit farmers. The barley and malt industries are definitely beginning to see possibilities related to the craft brewing industries. We have an extensive array of breweries and pubs now which have also opened up possibilities for bands and artists that just weren’t there before. We have some of the best brews in the country made right here in the state and the fact is that the craft brewing industry is one of the few that is actually growing in the state and we need to nurture and promote it and all of the industries that it embodies.

MCB:    You bring a wider scope than most do to the farming conditions, water qualities and how local laws apply and bind the craft movement. What do you think may be the upcoming hurdles brewers in this state may face? Let's start with this... TELL ME EVERYTHING
Jason: These issues, farming conditions, water quality, local ordinances, really affect us all on a greater scale than most people are willing to recognize. You don’t see it on the news or read about it unless you turn to the back pages. The fact is that we are returning to an agrarian society that needs to be focused locally. The explosion of farmers markets and pushes for GMO labeling and “eat local” campaigns are not a flash in the pan, they are necessary.
The hurdles the industry will face will be a lack of hops productions facilities, a lack of canning/bottling facilities, and outdated regulations and laws that restrict growth in the industry and which are maintained by corporate dollars in the political ring, but there are a lot of great people working on these issues in the state right now. The economic impact of the craft beer industry in the state is incomparable to any other industry and legislators are starting to take notice.