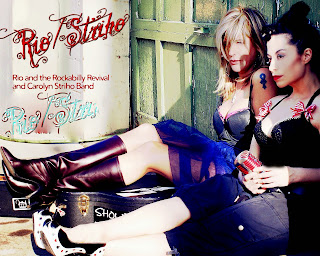 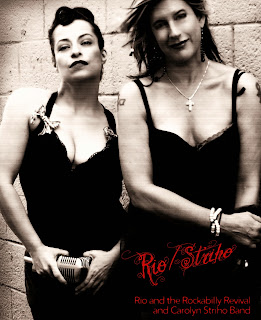 email motorcityblog@earthlink.net for your shot at hooking up with a hot pair of tix to check out a hot pair of chicks dishing out some of the baddest jams around
RIO/STRIHO – Rio Scafone and Carolyn Striho

Carolyn Striho is back with her full band performing with the riveting Rio & the Rockabilly Revival on Friday night, July 18th, 2014 at 8 pm at Callahan's Music Hall in Auburn Hills, Michigan.  Winner of 3 Detroit Music Awards this year, and a total of 7 this year within the Carolyn Striho Group, Striho released her latest CD "Word Attack" to great reviews and an award for Outstanding Acoustic CD of the Year 2014 in Detroit.  Guitarist Scott Dailey of the Carolyn Striho Group also received an Outstanding Country CD of the Year for his new CD "So Much Time to Burn."

Rio & the Rockabilly Revival just received Hour Detroit Magazine's Best Original Artist/Band award and will be releasing a new single at the show,  The high-energy, wildly passionate and catchy live action is ripe and ready as Rio & the Rockabilly Revival are one of the most exciting bands onstage to perform with.  The Rio/Striho show sold out Callahan's last year and many people wanted a return - we're happy to be bringing it back.

Carolyn's history is vast and goes back to the punk days at Bookies in Detroit – with her work in her early bands (Cubes, Rough Cut) to her infamous Detroit Energy Asylum within Was (Not Was) band, and with Patti Smith later, Striho continues to release new music and has done some incredible live shows in the past several years.  Carolyn also is a teacher and loves writing, performing, and creating.   Carolyn's also invited back to tour in Italy this year and is working on another new album, video and a book.

- Callahan's is Carolyn's first big live blast for 2014  - and a triumphant return for Carolyn to a full stage and music show after surviving breast cancer and multiple surgeries in the recent year.

Tickets are $10 available  at http://atcallahans.com/sliders/riostriho-rio-scafone-carolyn-