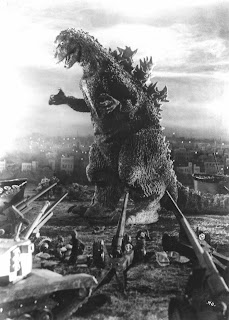 The Detroit Film Theatre (DFT) at the Detroit Institute of Arts (DIA) will present outdoor movies at three Huron-Clinton Metroparks in August that celebrate the anniversaries of two pioneering films: the original, uncut 1954 Japanese version of Godzilla and the Fab Four's A Hard Day's Night in a newly restored version.

Movies will begin each night at 8:45 p.m. with a short reel by award-winning Michigan student filmmakers presented by the Michigan Student Film Festival, an annual competition organized by Digital Arts, Film & Television. Films are free with park admission and will screen on Aug. 1 and 2 at Kensington Metropark in Milford; Aug. 8 and 9 at Stony Creek Metropark in Shelby Township; and Aug. 15 and 16 at Willow Metropark in New Boston. For park information, visit www.metroparks.com or www.dia.org/dft.

Celebrating its 60th anniversary, Godzilla is the monster movie that ushered in an entirely new genre of movie entertainment—one that still is front and center in the minds of moviegoers, as evidenced by this summer's hugely popular reimagining of the giant lizard's legend. Directed by Ishiro Honda, the 1954 version of Godzilla was recently described as "Still the most awesome! Pop culture's grandest symbol of nuclear apocalypse!" by Entertainment Weekly. This version contains scenes that were removed from American prints of the film during the 1950s, and were replaced by newly shot "inserts" featuring American actor Raymond Burr. This restored version, without Raymond Burr, and in Japanese with English subtitles, gives moviegoers the chance to see one of the most highly influential monster movies ever made in an outdoor setting large enough to do justice to the "king of the monsters."

The 50th anniversary restoration of A Hard Day's Night, one of the most popular and influential movie musicals ever made, features the big-screen debuts of John, Paul, George and Ringo, also known as The Beatles. Under the supervision of the movie's original director, Richard Lester, A Hard Day's Night has undergone a painstakingly thorough restoration, emerging with a crispness in both picture and sound that makes the vitality, laughs and musical excitement of A Hard Day's Night feel even more electric than it did during its original 1964 worldwide release. Described by Roger Ebert as "one of the great life-affirming landmarks of the movies," A Hard Day's Night features a host of great Beatles classics, including "Tell Me Why," "Can't Buy Me Love," "You Can't Do That," "I'll Cry Instead," and, of course, the title song. Filmed on location in and around London, A Hard Day's Night is a potent time capsule of a specific place and era in pop culture history and a total delight—especially in the great outdoors.

The DFT auditorium will be closed this summer for renovation of the air handling and lighting systems. When the DFT reopens on Oct. 10, audiences will experience a more comfortable, quiet and energy-efficient environment to enjoy the many programs hosted in this historic venue.